It’s 8 a.m. Do you know where your dog is? If he’s anything like the strays in Moscow, he’s already on the subway headed to work. Don’t believe us? The truth may surprise you. 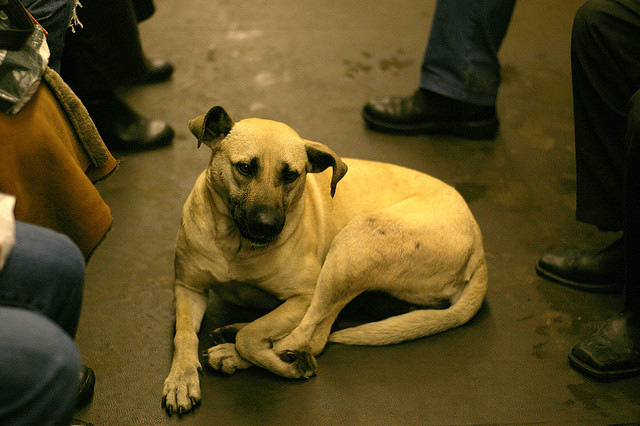 Life on the streets is hard, especially for one of the over 30,000 stray dogs in Moscow. The city has become so crowded that just like people, the dogs are spreading out into the suburbs. The problem? The city’s where the magic is when you’re forced to rely on the kindness of strangers to survive. In Moscow, some of these clever canines have to commute to “work” each day to make it. How do they get there? The same way you do.

The subway dogs of Moscow: Fact or fiction?

It’s easy to assume the dogs are just following people and happen to take the subway, but is that really the case? According to Dr. Andrei Poiarkov of the Moscow Ecology and Evolution Institute, who has been studying these animals for years, they know which trains to take and when to get off. When they’ve finished for the day, they get back on the subway and head home to the same stop where they got on. They navigate the underground system like a grizzled New Yorker.

What do they do on the train?

While they’re on the train, they do the same things we do when our smartphones or tablets have run out of battery. They nap and listen for their stop to be called. The veterans help the rookies remember where to get off. Sometimes, they even fall asleep and miss their stop. When it’s crowded, they may sit on the floor, but if there’s room, they’ll find a seat. The good doctor even says the dogs have surprisingly few, ahem, “accidents” on the train.

They don’t fear the bipeds they ride with. They just consider us fellow commuters — other blue-collar workers on the way to put in a hard day’s work.

The people are so accepting of these hard-working dogs, it’s not unheard of to see a person give up their seat for a particularly tired-looking pup. In fact, so saddened were Muscovites at the brutal murder of one of the metro staples, they erected a statue of the dog, which passersby scratch for good luck.

What do they do when they get there?

The daily grind for these pooches consists mainly of panhandling for food. They usually target children or people who are already eating. They may even scavenge behind a restaurant. But don’t think it’s random. They change their behavior depending on their mark. They know kids can’t resist it when they flash those big brown peepers. They’ll even bark at passing adults who are already eating in an attempt to startle them into dropping some food.

They’ve adopted a pack structure that favors smarts over strength, and often train the younger, cuter dogs to do the legwork because they know humans react more positively to them and they’re more likely to bring home the bacon (or cupcake… they aren’t picky).

It’s called survival-based evolution. According to Dr. Poiarkov, these animals are surprisingly good psychologists, which allows them to rely on people for food. But all work and no play makes Fido a dull boy. Poiarkov says they also ride the train for fun.

See how the Moscow subway dogs do it

Is this a good thing?

Yes and no. We give a tip of our fashionable pink hats to the Muscovites for dealing amicably with a tough situation and even ensuring that funds set aside to help these dogs do just that — rather than pad the pockets of greedy government types. But as smart as they are, stray dogs aren’t optimal. That’s why we’d like to remind you to take our old pal Bob Barker’s sage advice and have your pets spayed or neutered.