Everyone needs to bow down to Tina Fey. The 30 Rock star completely blew away the fashion competition at the 2013 Emmy Awards. 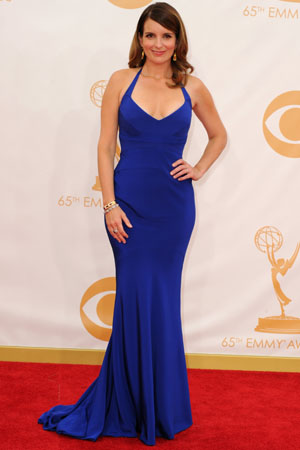 It’s hard to believe that Tina Fey ever had an awkward phase, especially since she continues to make our jaws drop at every awards show. However, she once admitted to Vogue that her favorite outfit as a child “consisted of a bonnet and a burlap apron and a long skirt. And I would just wear it sometimes after school. As an outfit. It was the Bicentennial! People were excited!”

Well, people are still excited about Fey’s fashion — and for good reason! The former 30 Rock star basically won the 2013 Emmy Awards red carpet in her Narciso Rodriguez gown. The royal blue creation fit the 43-year-old in all the right places and put other celebs to shame.

Fey added Fred Leighton jewels and Roger Vivier shoes and clutch to complete the halter gown. Her makeup was simple, but her sexy waves and deep side part really complemented the dramatic dress.

The best part of Fey’s appearance at the 2013 Emmys? She said she might reprise her role as host of the 2014 Golden Globes with BFF Amy Poehler!

What did you think of Tina Fey’s look at the 2013 Emmy Awards? Sound off below!