Girls star Lena Dunham went playful in Prada at the 2013 Primetime Emmy Awards. The only question: Do you love it or hate it? 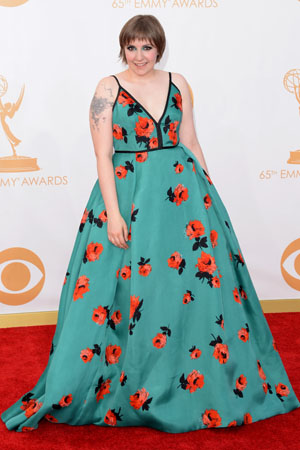 Very few stars caused as much Emmys buzz on Twitter as did Girls star Lena Dunham. The 27-year-old actress and writer opted for a bright teal Prada gown with equally bright red flowers and a plunging neckline.

Fans were polarized by the look… to put it lightly.

“I love Prada, but that dress that Lena Dunham is wearing looks like a tablecloth. #Emmys #NotMyFavorite,” @greta_anderson tweeted.

Our thoughts? She’s definitely having fun! It might not be our favorite dress of the night, but we appreciate how she matched her eye shadow to her dress — and how confident she looks in her Prada creation.

We have her parents to thank for that!

“My parents both have really healthy attitudes about their own bodies but also about the range of things that can be beautiful,” Dunham told Marie Claire U.K. in August. “But they also just always made me feel pretty and cool and smart, even in the moments when I have known — and still know — that my body wasn’t fitting into a traditional Hollywood idea of the female body.”

She’s always had a lot of self-confidence, though.

“I remember looking in the mirror as a kid and it would be like for an hour at a time, and I’d be like: ‘I’m just so beautiful. Everybody is so lucky that they get to look at me,'” she added. “And of course that changes as you get older, but I may have held on to that little-kid feeling that was me alone in my bathroom.”

Absolutely nothing wrong with that, Lena! We hope all young girls take that page out of your playbook.

What did you think of Lena Dunham’s 2013 Primetime Emmys gown? Sound off below!