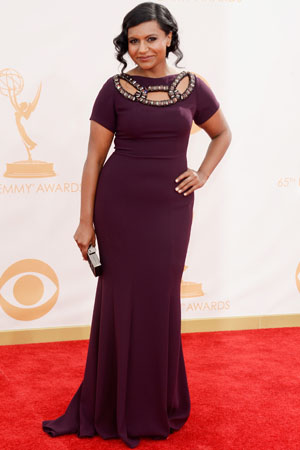 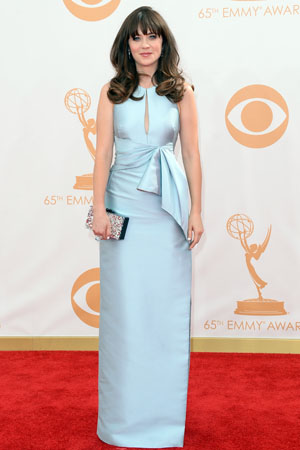 Mindy Kaling and Zooey Deschanel have two of the best shows on television right now. We can’t get enough of The Mindy Project and New Girl — both shows are hilarious in their own ways, much like the stars themselves.

The two comedians also have a very different sense of style. Kaling — who once described her style as “’80s aerobics coach meets Maasai tribeswoman” — wore a beautiful (and curve-hugging!) gown from Edition by Georges Chakra.

Deschanel, on the other hand, opted for a baby blue satin gown by J. Mendel. The structured gown totally fits the quirky actress’ retro style. She’s worn similar looks at previous awards shows, so we aren’t too surprised she opted for a similar look at the Emmys.

And why not? She prefers the throwback look — and it works for her.

“Wear what looks good on you,” Deschanel told Refinery29 when asked what advice she has for other style-savvy women. “Also, fabrics have gotten a lot more comfortable in recent years, so new clothes with vintage cuts are also a great option for practicality.”

Now, the big question: Who had the best look at the 2013 Emmys? It’s so difficult to choose, especially because we love both Kaling and Deschanel for their individuality. Ultimately, we go with Kaling for taking a risk since Deschanel almost always wears blue.

Both are always fabulous in our book, though.

Who looked better at the 2013 Primetime Emmy Awards: Mindy Kaling or Zooey Deschanel? Sound off below!

Heidi Klum, Tina Fey & more best dressed at the Emmys
2013 Emmys fashion: Did these celebs get it right?