Friends, the South has never been hotter. We aren’t talking about temperatures either. Over the past few years, the Southern food scene has exploded and now houses some of the most talked about restaurants, chefs and food in the world. 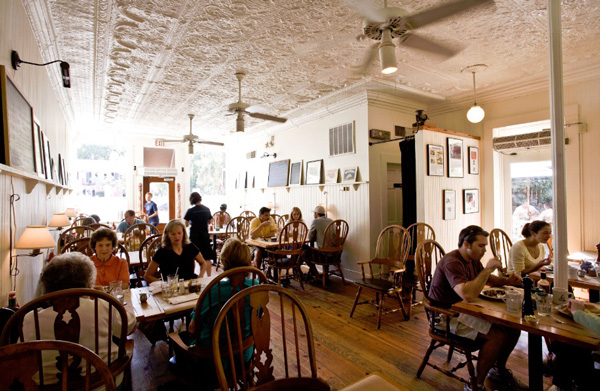 And it ain’t all fried chicken, either (although they do master that, quite beautifully). We took our appetites and trucked all the way from Virginia to Louisiana to find our top 10 favorite new (and old) Southern restaurants. Just looking at this list is making us hungry all over again.

Contrary to the name, the food, atmosphere and staff in Charleston’s newest hot spot, The Ordinary, is far from ordinary. But what do you expect from Chef Mike Lata, owner of another famed low-country restaurant, FIG. The dishes are local, the Capers Inlet clams and fresh market oysters are caught by a native fisherman and the fresh vegetables are plucked from farms no further than hour away.

Recently named the No. 1 restaurant in the D.C. area by Washingtonian magazine, the Inn at Little Washington knows a little something about food and fine dining. The opulent dining rooms with fringed lampshades and gold ceilings may impress you, but the farm to table dishes, like the tuna tartare with cucumber sorbet and blueberry marinated pigeon will completely enchant you.

Since it’s opening in 2004, Restaurant Eugene has grown into an Atlanta institution, a must-visit eatery for locals, tourists and the culinary elite. James Beard award-winning Chef Linton Hopkins features only locally sourced, Southern-grown ingredients, which he prepares in an unusually witty way (Southern fried lily blossoms, anyone?). The menu changes nightly, so don’t expect the same dish twice.

Any restaurant that has a 45-minute wait by 9 a.m. is one worth going to. Hominy Grill, which has been around since 1996, is located in an old barbershop in a restored house on Rutledge Avenue. The fare is as Southern as it gets but is made with only the freshest ingredients. The stone-ground grits, fluffy biscuits and the house-made sausage are a must.

Although the name symbolizes something big and meaty, the menu at Oxheart in Houston is comprised of mostly fresh vegetables like pickled okra and poultry, like their guinea hen . Husband and wife team Justin Yu and Karen Man are native Houstonians and pay homage to their Southern roots in all of their dishes. If you can, grab one of the 10 stools surrounding the counter so you can have front row seats to the action.

Gourmet grub and five-star service doesn’t have to come with a fancy white tablecloth. In fact, at Hog & Hominy in Memphis, it comes to your table wearing trucker hats and T-shirts. The decor is as laid back as the staff’s attire while the food is understated but incredible. Opt for their Southern version of poutine, made with french fries, neck-bone gravy and tons of local cheese curds.

Chef Sean Brock helped establish Charleston as a culinary mecca thanks to the genius Southern fare served at Husk. Due to its incredible success, Brock recently opened a second restaurant in another up-and-coming food city, Nashville. Although the menus are a bit different, the style and level of quality is the same. In Charleston, the fried chicken skins are a must and in Nashville, don’t leave without trying the bologna sandwich.

In the South, barbecue is a religion, something to be coveted, worshiped and treated like gold, which is why we love The Pit in Raleigh, North Carolina. The recipe for their authentic whole-hog roast has been in pit-master Ed Mitchell’s family for years, so you know it’s good. Their famous ribs won them fame on the Food Network, but their sides, like the creamy coleslaw and mac ‘n cheese, are also worth a taste

Hugh Acheson knows a little bit about Southern cuisine. When he’s not judging wannabe chefs on Top Chef, he’s working with Executive Chef Ryan Smith on the beautiful, creative and downright delicious Southern dishes you see on your plate at his renowned restaurant Empire State South. Try the pork-belly oats with bok choi and coddled eggs or the South Carolina scamp with butternut squash puree and peppers.

When Southern Living names you a restaurant to eat at now, you know you’ve done something right, and boy is that right for Cochon. This pork-loving restaurant pays tribute to its Creole and Cajun roots and serves up dishes inspired by it, like roasted shrimp with hog jowls and roast pig with turnip, cracklins and cabbage. Chef Donald Link is known for using every possible bit of the pig he can, so expect some pork on almost every plate.