All cat owners have the same problems: What do we do with the litter box and where do we put it? Jillian Harris steps in for a “littervention” to help homeowners turn their litter box into a stylish “do” instead of a stinky “don’t.” 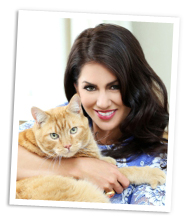 All cat owners have the same problems: What do we do with the litter box and where do we put it? Jillian Harris steps in for a “littervention” to help homeowners turn their litter box into a stylish “do” instead of a stinky “don’t.”

Recently, Jillian Harris joined with Tidy Cats to assist in a “Littervention!” The idea behind the concept was to assist kitty owners in tidying up their home and turning their litter box space into a room that was pleasant for both cat and homeowner. With Jillian a home decor and design expert and currently on Love it or List It Vancouver, Tidy Cats knew that she was the perfect gal for the job.

Littervention winner Ricci shared his workout room with his cat, Miss Bella, and her litter box. Seeing that the litter box created a bit of a mess and an unpleasant smell, Jillian opted to stage an area that would be relaxing for both Ricci and Bella. Jillian chose to stay with a neutral theme. Noting that Bella the cat isn’t aware of the decor, she wanted to ensure that Ricci, or any homeowner, for that matter, isn’t changing the litter space into something that makes them uncomfortable. Especially in this case, as Bella is a female cat and Ricci is a male human, she wanted their decor to blend well together.

Adding a few home decor staples to the space, Jillian neatly hid the litter area using a storage bench made especially for litter boxes, where Bella had her very own space to do her business. Adding a neutral throw pillow in chevron, Jillian’s favorite pattern and one that will stay on-trend through the season, the bench became a relaxing and inviting space. In addition, she added cute framed photos of none other than the cat herself.

To turn your own litter box space into a sanctuary rather than a stink zone, Jillian suggests giving your kitty a space within your own. Turn her space into something that you can live with, but that the cat feels comfortable in. Decorate your space with a neutral palette and trendy pieces that are easy to switch out, rather than all trendy items that may cost more (and that you may grow tired of faster). Use a bench or storage ottoman, as Jillian did, for your kitty-litter space to avoid seeing or smelling your kitty’s business. 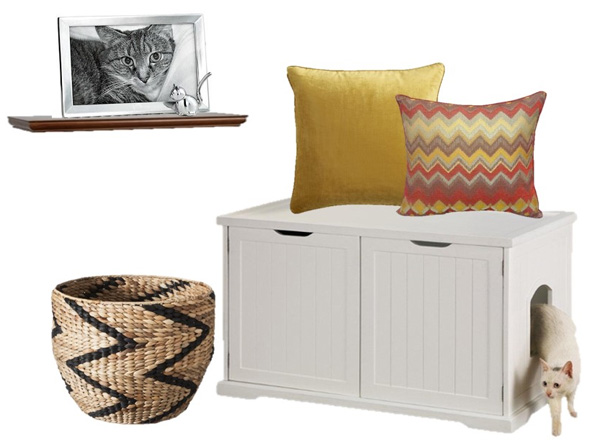 More from out of the litter box