Miley Cyrus’ twerking might have made her one of the most notorious names in Hollywood, but now she wants to be known for something a bit more sophisticated. 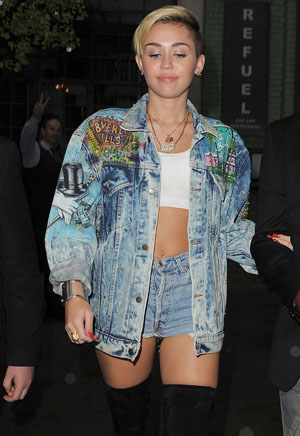 Anna Wintour may have put the kibosh on Miley Cyrus’ planned Vogue cover after Miley’s 2013 MTV Video Music Awards debacle, but Harper’s Bazaar is a little more forgiving. The “Wrecking Ball” singer appears on the cover of the fashion magazine’s October issue in a body-hugging — yet demure — black dress.

It’s a far cry from the revealing outfits she’s been spotted in over the past several months, though the 20-year-old says she’s more comfortable when she’s showing off her scandalous personal style.

“I feel like every girl is trying to have a beauty shot and prove that they’re ‘fashion,'” she told the magazine. “But I can be in white leggings and a white sports bra and I’m on a whole other level of s**t that those girls don’t even get yet because they don’t know how to do it.”

So, will Cyrus show us how to “do” fashion? Yes, but don’t expect her to release a fashion line as Nicki Minaj or Selena Gomez did.

Been there, done that: Miley released a Wal-Mart line in 2009, but it didn’t turn out the way she’d envisioned.

“I went in there and saw, like, a puppy on a T-shirt. I was like, ‘This is not what I wanted.’ I wanted skinny jeans, I wanted to bless Walmart with jeggings!” she told the magazine.

Now she says she’s considering doing a jewelry line — but not immediately.

“Making real stuff with high quality,” she added to the magazine. “Not quantity. But not until I know I can give it 120 percent. I don’t want to just slap my name on something.”

We have to wonder: Will it look more like Heidi Klum’s sophisticated line or more like Ke$ha’s tooth-and-phallic creations? We’re betting on the latter.

Would you buy jewelry designed by Miley Cyrus? Sound off below!