Considering liposuction? Don’t rush to go under that knife — there are many options to consider! 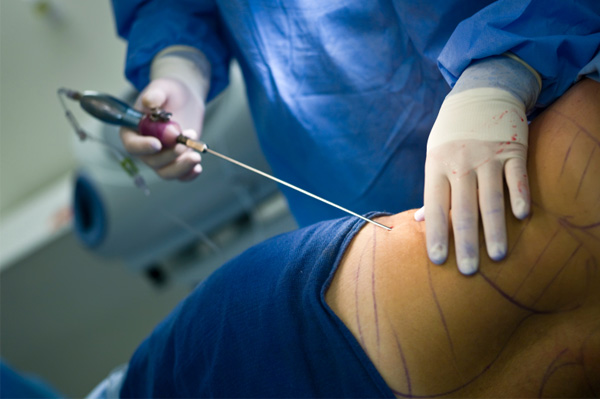 “Liposuction is a great way to get rid of unwanted fat. While diet and exercise remain the best way, tumescent liposuction is a close second,” says Joel Schlessinger M.D., FAAD, FAACS, board certified dermatologist and cosmetic surgeon and President Emeritus, American Society of Cosmetic Dermatology and Aesthetic Surgery as well as the president of LovelySkin.com.

“Tumescent liposuction uses numbing fluid (like what your dentist injects to numb up before a filling) to plump up the areas and then a small cannula (a small rod about the size of a sippy straw) is inserted and fat is suctioned,” explains Schlessinger. Regular or traditional liposuction uses general or heavy anesthetic to ‘put someone out’ and then uses cannulas that are much larger (about the size of an oversized straw) and usually results in much more bruising and a lengthier recovery (weeks, as opposed to days). The least risky method is tumescent liposuction, if done the right way and without any general or heavy sedation.

Is it the brave new world? In this form of lipo, a laser is used along with regular or tumescent liposuction. “Generally, this results in a little more fat being removed and recovery can be quicker, yet the quickest recovery is the tumescent liposuction when done with or without SmartLipo,” explains Schlessinger.

Remember trickle-down economics? Well, the possibilities are endless. Imagine taking fat from one part of the body and grafting it to another area!

Dr. Jeffery Hartog of the Bougainvillea Clinique in Florida starts with gentle liposuction, usually in the thighs or abdomen. “Even thin women have enough fat for the procedure, which does not require hospitalization!” says Hartog. The fat is then prepared and frozen. Extra fat can be stored indefinitely, for later use.

Once taken from one area of the body and purified, it’s then injected in small droplets into the face, hands or breasts. Once the fat is injected, the body quickly builds a vascular network to support it, making it permanently attached to the “new” part of the body.

One of the key ways that Dr. Hartog uses the liposuction is to reconstruct women’s breasts after a mastectomy. Women are left with natural looking and feeling breasts and often times they regain skin sensation, which isn’t the case with traditional implants.

Can we avoid the knife?

Totally non-invasive fat treatment is now available, yet it doesn’t result in as much fat removal as liposuction. “I tell my patients it will remove about 20 percent to 40 percent of fat as opposed to 40 percent to 80 percent with tumescent liposuction,” says Schlessinger. Zeltiq/CoolSculpting seems to be the winner due to ease and results, yet Liposonix is favored by some practitioners. Pain is generally felt to be less with the Zeltiq/CoolSculpting. Liposonix uses high-intensity focused ultrasound (HIFU) technology to deliver permanent, non-invasive fat reduction. Patients can expect to lose one pant or dress size in one hour with just one treatment.

A recent study was published in the August Issue of Aesthetic Surgery Journal regarding CoolSculpting, a non-invasive weight loss procedure that freezes and eliminates fat cells. According to the study, CoolSculpting is ranked the highest of similar treatments for patient satisfaction — with 823 percent more CoolSculpting procedures delivered in 2012 than 2010.

Most patients require at least two sessions to get effective fat removal, but never have to go through surgery making it an attractive choice for many who are looking to avoid surgical risks and downtime.

So what sort of lipo is the type for you? Tweet me at @AlyWalansky and we can discuss!

The truth about breast cancer and implants
What they don’t tell you about Botox
The knife vs. the needle: Pros and cons of non-invasive procedures