Mom’s night out! Kate Middleton made her first official post-baby appearance at the Tusk Foundation gala. Naturally, she opted for Jenny Packham. 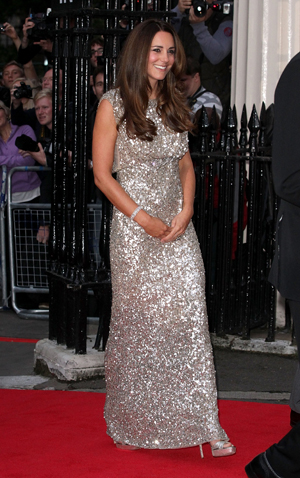 Kate Middleton and Jenny Packham go together like peanut butter and jelly. Packham has been Duchess Catherine’s go-to designer for a number of events over the past couple of years, including her first post-baby appearance outside St. Mary’s Hospital in July.

So it’s not exactly surprising that Middleton opted to wear a Jenny Packham creation for her first official post-baby outing. The 31-year-old mom wore the custom floor-length sequin number to the Tusk Foundation’s gala on Thursday night in London. Middleton kept her hair down in the loose waves we all know and love — and she kept her makeup simple.

It’s hard to believe this is the same woman who gave birth two months ago. The mom of baby Prince George isn’t hitting the gym, though — sources told Us Weekly that she’s not doing anything special to get the post-baby weight off.

“Kate’s still breastfeeding and the small weight she gained while pregnant has just melted off,” the source said. “She’s not dieting. After giving birth, she did continue with her yoga.”

“The dress is one of our signature styles — we know she loves it as she has it in two other colors — she really loves the shape! And it’s perfect post-pregnancy when you still have a little tummy,” Séraphine founder Cecile Renaud told People in July.

What do you think of Kate Middleton’s sequined Jenny Packham dress? Sound off below!

15 hrs ago
by Summer Cartwright