Besties Taylor Swift and Selena Gomez both walked the red carpet in navy at the 2013 MTV Video Music Awards. We have to know: Who wore it better? 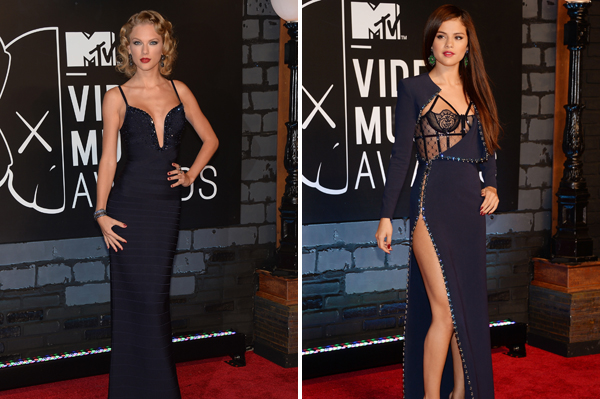 BFFs Selena Gomez and Taylor Swift both showed up to the 2013 MTV Video Music Awards in the same color — navy — but that’s where the similarities ended.

The 23-year-old also wore another accessory, though we couldn’t quite see it. MTV correspondent Sway commented that Swift “smelled good” on the red carpet. It turns out she was wearing her new perfume, Taylor by Taylor Swift. No better way to promote it than that!

Gomez, on the other hand, opted for an edgy Atelier Versace dress with studded embellishments and a peekaboo lace bustier. It’s one of the more original looks we’ve spotted on the red carpet lately — and the 21-year-old was the perfect choice to wear it!

It’s hard to choose the better look at the 2013 MTV VMAs since the two looks are so different. We loved Swift’s overall style, but Gomez gets our award for the best dress.

Not that they’re comparing their looks: They were too busy jamming out to *NSYNC and throwing shade at One Direction’s Harry Styles in the audience.

“Selena’s here, and we always turn it into a fun evening,” Swift said.

Who looked better in navy at the 2013 MTV Video Music Awards, Selena Gomez or Taylor Swift? Sound off below!

Ellie Goulding & more best dressed at the 2013 MTV VMAs
2013 MTV VMAs: Did these celebs get it right?