Beyoncé may have chopped off her hair a couple of weeks ago, but she’s already wearing extensions during performances. 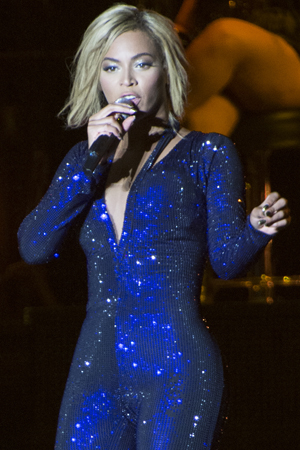 The singer — who just chopped off her trademark long hair a couple of weeks ago — showed up onstage at the 2013 V Festival in the U.K. with a shoulder-grazing lob hairstyle. The singer looked sassy in her hairpiece, but we already miss her short pixie cut.

“I think it is sexy, strong, a statement, empowering,” Rita Hazan, Beyoncé’s hair colorist, told E! of the short style. “She always had beautiful, gorgeous tons of hair and for her to strip down and reveal herself this way is a very powerful moment.”

“When I saw her cut, I knew the color had to be soft but powerful,” Hazan added to Billboard of the color inspiration. “She wanted to keep her natural color as a grown out look with roots to give it an edge. Thankfully, she allows me creative freedom, which is amazing for a colorist. And she lets me get to the end result in my own way, which in this case ended up a beautiful Champaign [sic] blonde.”

It’s kind of sad that Bey’s already covering all of that hard work with extensions. However, those close to Blue Ivy’s mother expect her to wear extensions and wigs for the next leg of her Mrs. Carter tour since it’s “part of the show.”

The short hair might make a comeback for a new music video. Her stylist, Kim Kimble, is looking forward to working the short strands into a statement style.

“I had a whole plan laid out. I wanted to do a retro ’50s type of hair. I feel like there’s going to be a meeting soon!” Kimble joked to People earlier this month. “It won’t be the long, wavy, typical hair, but I’m really excited to do something different. No matter what, she knows I’ll give her what she wants!”

We have to remember one thing, though: Beyoncé makes her hair — the hair doesn’t make her.

“Beyoncé can have a strand of hair on her head and still be fine,” her Destiny’s Child bandmate, Kelly Rowland, told TMZ.

What do you like better: Beyoncé’s short hair or her longer lob hairstyle? Sound off below!

Celebs with and without bangs: Which look do you prefer?
What would make Jennifer Aniston shave her head?
Get Lily Collins’ retro Teen Choice Awards hairstyle