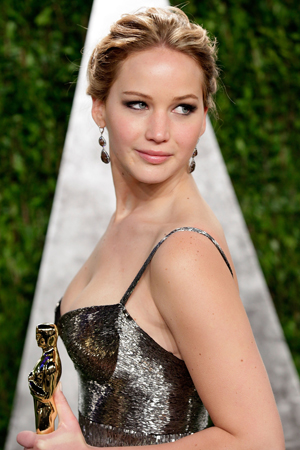 Jennifer Lawrence took home a gold statue for her role in Silver Linings Playbook, but a few (lucky?) movie voyeurs took home their own little prizes: her costumes from the movie.

And, as buyers usually do at celebrity auctions, they spent a huge amount to do it.

Nate D. Sanders Auctions sold several of her wardrobe items from the film, including these bargains:

The big question is: Who would spend that amount of money on used clothes? Sure, there are tons of collectors who gather movie props, but we assume these cash outlays have more to do with Lawrence’s looks.

Not that J. Law doesn’t have amazing style.

The new face of Christian Dior loves the recent photos of her ad campaign — mostly because they show off a different (read: fake) side of her.

“That doesn’t look like me at all! I love Photoshop more than anything in the world,” she told Access Hollywood‘s Billy Bush of the shots.

“Of course it’s Photoshop. People don’t look like that.”

No — and we wouldn’t want you to, Jennifer. We love her pretty, girl-next-door looks and outspoken ways.

And now, some lucky winners get to appreciate her used clothes. Good for them?

4 hrs ago
by Jessica Arnold