Beasts of the Southern Wild‘s Quvenzhané Wallis had a constant companion at this season’s series of awards shows: her adorable little puppy purse! Want to get the purse for the little fashionista in your life? You’d better hurry: It’s selling out! 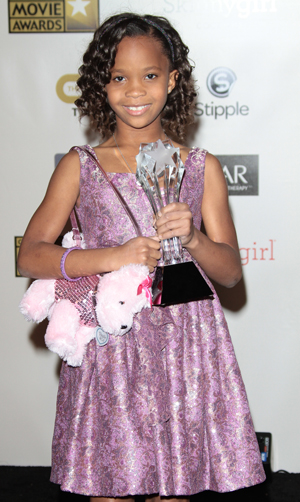 Let’s face it: Young Hollywood stars have a reputation for dressing way older than their years.

Not Beasts of the Southern Wild star Quvenzhané Wallis. The 9-year-old dresses appropriately for her age. Case in point: her adorable puppy purse! The actress has rocked the purse on every red carpet this season.

And why? Because she likes dogs, of course.

“This is a special dog. It’s renamed after my puppy I have at home — Sandy,” she told Ryan Seacrest before the 2013 Academy Awards.

Wallis’ affinity for puppy purses has sparked a trend — and now the company that makes the handbags is seeing a huge uptick in sales.

“The interest after the awards show has been unbelievable,” Leslie Palmer, division president at Cudlie Accessories, which owns Poochie & Co., told CNN. “We’ve seen sales shoot up 25 percent to 30 percent since she started wearing them.”

“Many of our retailers have told us that they’ve seen sales increase over the last few weeks,” Palmer added.

The company is now planning to make a purse that looks like the custom Yorkshire Terrier purse Wallis wore to the Oscars. The bag is slated for mass release this summer.