Beyoncé might be riding high right now, but PETA wants to knock her down a few pegs for wearing leather during her Super Bowl performance. 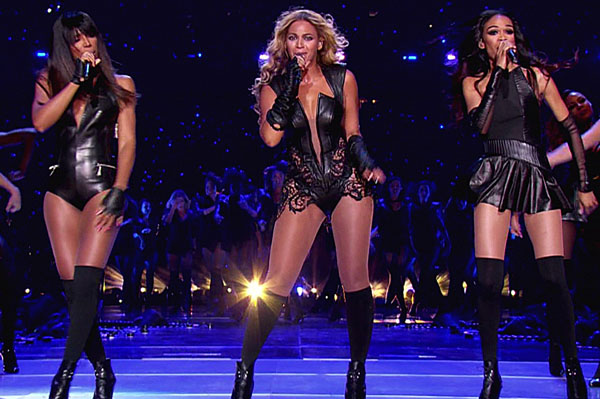 It seems like everyone was in awe of Beyoncé’s performance during the Super bowl halftime show on Sunday night.

Well, we take that back: Not exactly everyone was that happy.

PETA slammed Beyoncé on Tuesday for wearing a bodysuit made of python and iguana. The outfit — designed by Rubin Singer — also featured a bit of lace. But, that’s little consolation for the animal rights organization.

“We would take a bet that if Beyoncé watched our video exposes, she’d probably not want to be seen again in anything made of snakes, lizards, rabbits or other animals who died painfully,” PETA said in a statement. “Today’s fashions are trending toward humane vegan options, and Beyoncé’s Super Bowl outfit missed the mark on that score.”

We have to agree with them on that one: It’s not like we could tell what it was made of, so why not choose something other animal leather?

Not that Beyoncé really cares, though. The singer is pretty pleased with her performance.

“It was beautiful. It was really beautiful,” she told Yahoo!

“It feels good to know that the hard work paid off. It’s a live television show, it’s the biggest show in America. There are so many things that could happen and God was on my side.”

Next up for Blue Ivy’s mom? A world tour.

The European leg of The Mrs. Carter Show will start on April 15 in Serbia before Bey lands in the United States on June 28. The tour is scheduled to run until Aug. 3.

And the final show? At Brooklyn’s Barclays Center, of course.