Waiting to see Miley Cyrus in long hair again? You’ll be waiting for a while — the actress swears she’ll never go back to long strands. 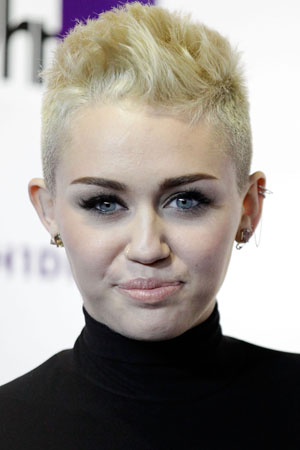 Miley Cyrus shocked the world in mid-2012 when she chopped — and dyed! — her signature brown locks into a close crop. It was a drastic move for the actress and singer, but she doesn’t regret it at all.

In fact, she says she’s never going back to long hair.

The former Hannah Montana star told E! News that she “in no way” misses her long hair.

“I feel like I had bun every day of my life,” Cyrus said. “I hated the extensions hair — that’s sewn into your head. It’s creepy.”

“You will never see me with long hair again!” she continued. “My fiancé loves it… It’s so easy and [I] don’t need to wash it. It looks better grungy and not washing it.”

And as for her relationship?

Cyrus made fans wonder about the status of her union with Hemsworth when she referred to him as her husband in the new issue of Cosmopolitan.

“I know, right? I’m happy I don’t have to date anymore though,” she said. “All my friends are guys, so I hear the s**t guys say about dating. One guy called me and said, ‘Miley, I don’t know what to do — this girl won’t leave my house. It’s 6:00 and I have a blind date at 6:30.’ And I was like, ‘I’m so happy I’m married, because you guys are cruel!’ It’s hard to find a good guy, and all girls know that guys don’t think with their brains.”

They aren’t married, according to sources. But, it’s not like we’ll know it when they do get married — especially since Cyrus swears it won’t be a big ceremony.

“I can’t even get coffee without a million paparazzi following me, so I don’t know why anyone think I’m going to have this huge, extravagant wedding,” she told Cosmo. “That is so not who I am.”