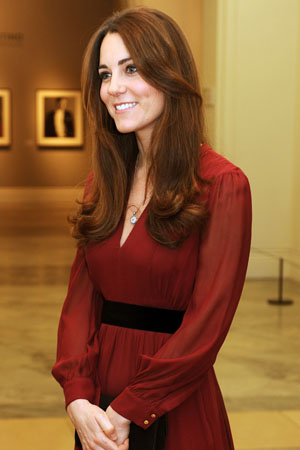 Kate Middleton is finally an official member of the royal family!

Whoa, wait — hasn’t she been married to Prince William for almost two years? Yes, but now she finally has her own official painting in Britain’s National Portrait Gallery, courtesy of artist Paul Emsley.

And yes, the Duchess of Cambridge sat for the photo — twice! — and was involved in the selection process.

“The Duchess explained that she would like to be portrayed naturally — her natural self — as opposed to her official self,” Emsley said, according to the official announcement accompanying the unveiling. “She struck me as enormously open and generous and a very warm person. After initially feeling it was going to be an unsmiling portrait I think it was the right choice in the end to have her smiling — that is really who she is.”

We agree that she’s always smiling, but this portrait is definitely too dark and not a great representation of the beauty that is Kate Middleton.

Regardless, she looks beautiful — and we’re still jealous of her style — but that’s not the only exciting news to come out of the royal family this week.

Queen Elizabeth overturned a nearly century-old decree and declared that the future child of Wills and Kate will be called either His or Her Royal Highness. That’s right: If it’s a girl, she’ll be a princess! Better yet, she’ll be first in line to take the throne down the road, too.

How exciting! We’ll be happy about the royal baby no matter the gender, but now we’re really hoping for a girl.