Kaley Cuoco went for a slightly quirky look with her nails at last night’s People’s Choice Awards in Los Angeles. We’ve got the scoop on how to score her look at home!

Related story 7 Reasons We're Excited to Watch the 55th Annual Academy of Country Music Awards — & You Should Be, Too 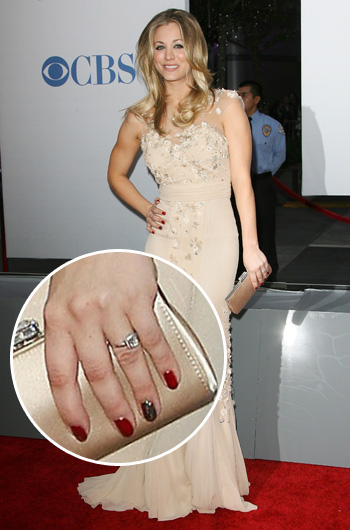 The Big Bang Theory‘s Kaley Cuoco did a fine job as host for the 2012 People’s Choice Awards last night, but us fashion gals were paying more attention to her fashion and beauty than her hosting skills! The quirky star looked simply chic in a floorlength cream jewel-encrusted gown, voluminous blonde locks and bold green eyeshadow.

To add a bit of fun to her look, Cuoco sported her trademark “lucky” manicure with two-toned nails styled by OPI celebrity manicurist Beth Fricke. Cuoco opted for OPI Nail Lacquer in Bastille My Heart on all her nails, except on her two ring fingers, which were colored with Nicole by OPI Nail Lacquer in Follow Me on Glitter.

What a cute, fun way to spice up a manicure, huh? This two-toned manicure is just one of several fun nail trends that have hit the scene this past year. Plenty of celebs have been spotted sporting the half-moon manicure lately, and celebs like Katy Perry have taken the words “nail art” to a whole new level. So we want to know: Would you wear a two-toned manicure?

Cute Sticker Packs for All Your Crafting Needs