Rooney Mara is fast becoming the “It” girl of the moment. She has the potential to be one of the people who lands on Barbara Walter’s Most Fascinating list next year, is Allure’s January cover girl and was recently nominated for a Golden Globe award for her performance in The Girl With The Dragon Tattoo. 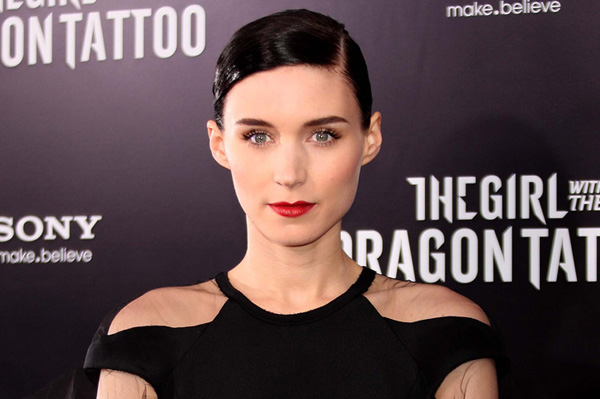 Ms. Mara is a striking looking woman with strong cheekbones and intense eyes. No doubt all of these helped her to become Lisbeth Salander, a part which called for much transformation on her part including shaving her head and getting multiple piercings. She is also football royalty, being the great- granddaughter of Art Rooney, founder of the Pittsburgh Steelers and Tim Mara, founder of the New York Giants, as well as sister to actress Kate Mara.

At the recent premiere of The Girl with the Dragon Tattoo, Rooney sported a softer look than her character, wearing a dress by Prabal Gurung and makeup by Chanel.

Rooney’s skin was prepped with Chanel Hydramax Serum first, and then it was perfected with Perfection Lumiere foundation, which was applied with a damp sponge.

Cheeks got a tiny touch of Tresbelle cream blush from Kevyn Aucoin’s makeup line just over the apples and the eyes went nude. Yes, nude. Ms. Lee used no shadow at all on them.

Brows were groomed with Crayon Sourcils brow pencil in Noir Cendre and held in place with black mascara, while lashes were curled and then Inimitable waterproof mascara was applied.

Lips got a coat of Rouge Allure Velvet in Les Somptueuse, what Lee calls “the perfect ruddy shade of brownish-red,” and was applied as a stain.