Extravagant and expensive engagement rings are a must for Hollywood’s hottest celebs, even if their marriages don’t last long! Check out our top 10 favorite celebrity engagement rings and the look-a-likes we found that won’t break the bank. 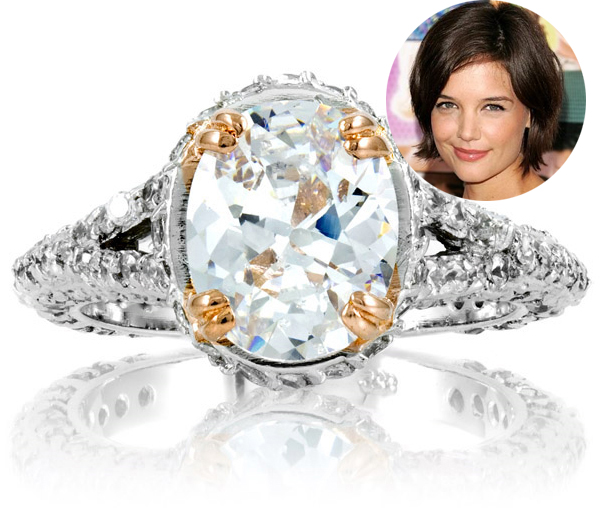 The beauty of this ring isn’t in how expensive it is, but in the thought behind the design. The platinum and diamond band raises off the finger to encompass a four carat oval diamond surrounded by rose gold. This pairing might seem odd, but it fits Tom and Katie’s shocking relationship (remember Tom Cruise’s jumping on the couch fiasco on Oprah?) to a T. You can buy the cubic zirconia version at emitations.com for $119. 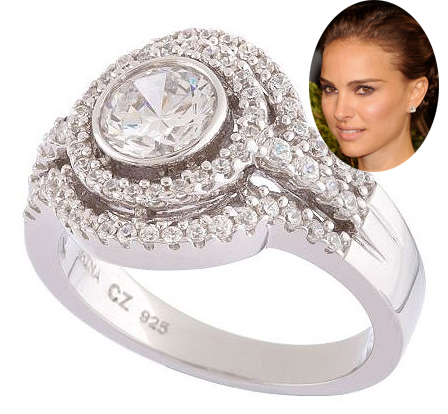 In the midst of all her Black Swan glory, it was only fitting that dancer-turned-designer Jamie Wolf collaborated with Millepied to make Natalie the perfect eco-friendly ring. This $35K ring is made of recycled platinum and diamonds from a conflict-free mine. Get the same floating center diamond look for $48 at QVC. 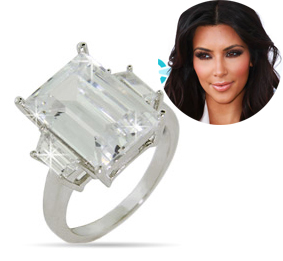 Kim Kardashian’s drop-dead stunning diamond headpiece wasn’t the only thing blingin’ at her $10 million wedding. Her Lorraine Schwartz ring is a whopping 20.5 carats! A little over-the-top, but you can steal the look for $54 at Eve’s Addiction.com. 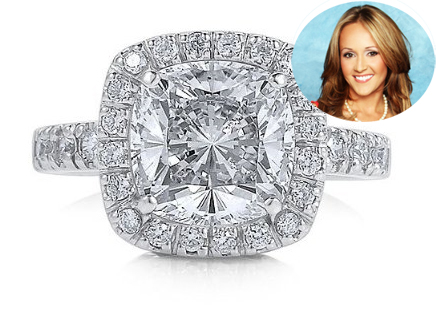 Ashley Hebert had a lot of ups and downs during her search for love on The Bachelorette, but boy did it pay off! J.P. chose this $60,000 Neil Lane ring. This sparkler has 162 small diamonds surrounding a center 3.5 carat diamond. Hopefully they don’t break up like Emily Maynard and Brad Womack, who had to give the ring back to Bachelor producers after their split. Get this look-a-like for $59 at Amazon.com! 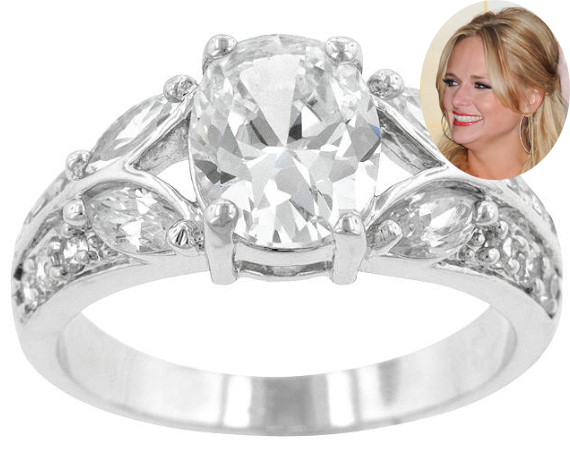 Miranda Lambert may be a self-proclaimed homewrecker, but that doesn’t change the fact that her engagement ring from Blake Shelton is gorgeous! Her wedding was totally country (her bridesmaids wore cowboy boots and Miranda shot the deer that was served for dinner), but her ring is definitely city chic. Get this oval and marquise three-stone setting for $21 at Overstock.com. 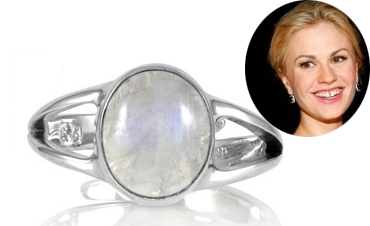 Stephen Moyer must have been shopping at the Moongoddess Emporium when he bought fellow True Blood co-star Anna Paquin’s ring. The center is a rustic-cut diamond so it looks a little cloudy, perfect for this Sookie Stackhouse actress. Get this moody ring, whether it’s for an engagement or not, for $50 at emitations.com. 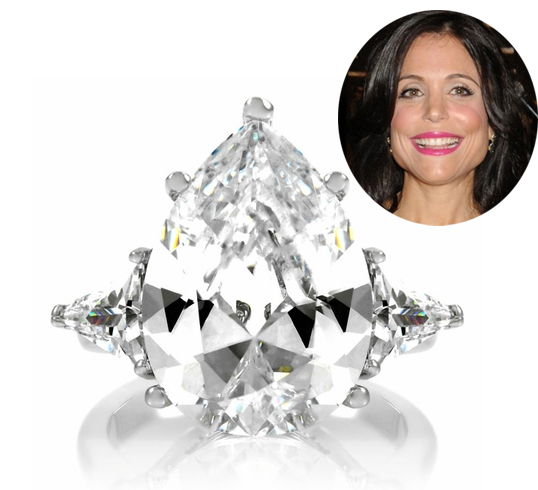 Bethenny Frankel joined the ranks of the other housewives when she accepted boyfriend Jason Hoppy’s proposal. Hopefully she won’t have to pawn her ring over her company’s lawsuit because we’re obsessed with it! Jewelry designer Kristen Farrell created this 6.5 carat pear-shaped ring, but you can find the imitation at emitations.com for $57. 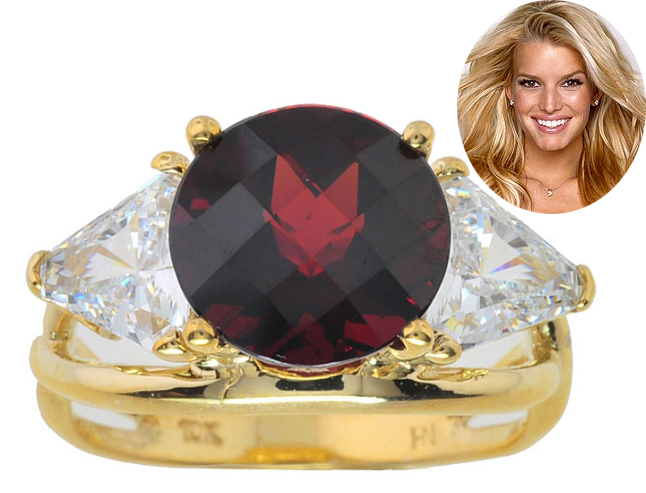 Jessica Simpson’s colorful second engagement ring is a far cry from the pear-shaped one Nick Lachey gave her! The ring is a vintage ruby flanked by two diamonds and set in yellow gold. It’s said to be circa 1900 so let’s hope rubies mean forever? Get this 10k gold, garnet and cubic zirconia ring for $212 at Overstock.com. 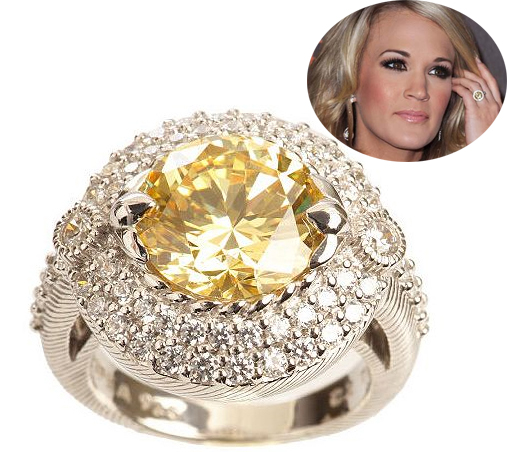 Ottawa Senators player Mike Fisher proved he can do more than play hockey when he picked out Carrie Underwood’s engagement ring, estimated at $150,000! Jonathon Arndt designed Carrie’s ring with a massive yellow diamond surrounded by rows of smaller diamonds. Now that’s our kind of ice! QVC’s diamonique line offers a similar design by Judith Ripka for $110. 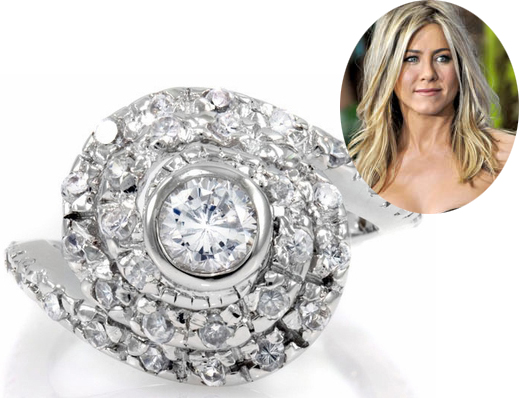 Jennifer Aniston may have had her man stolen from her by Angelina Jolie ages ago, but we hope she kept the ring! This ring tops the list of celebrity engagement rings with its beautiful swirl of diamonds raising up to a center circular diamond, reportedly representing eternity. Unlike Italian jewelry designer Silvia Damiani, you won’t get sued for wearing this replica from emitations.com ($65).

47 mins ago
by Tamara Kraus

21 hrs ago
by Ramisa Tasnim