Keep your cat’s vaccinations current with these helpful tips from Dr. Lesli Groshong. 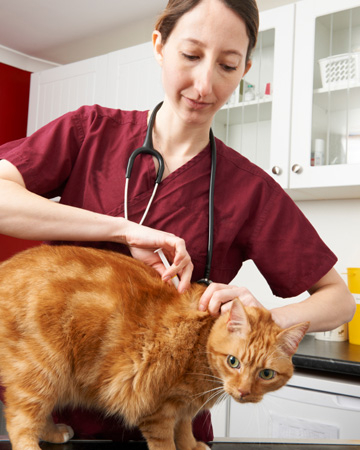 Cats are “easy” pets. They keep to themselves, don’t need to be entertained and don’t fuss too much if you’re too swamped to pay much attention for a couple of days. Their use of the litter box means you don’t even have to worry about accidents around the house (as long as you keep it cleaned out!). Still, cats aren’t completely maintenance free, as some cat owners would like to believe. They do need to keep current on a few vaccinations to help ensure they stay healthy and avoid some serious conditions common to our feline friends.

“There are only two core vaccinations that every cat should receive regardless of its indoor/outdoor status,” said Dr. Lesli Groshong, chief shelter veterinarian at the Humane Society of Boulder Valley.

The FVRCP (feline viral rhinotracheitis, calicivirus, panleukopenia), also referred to as a distemper vaccine, is first given to kittens as a combination vaccine every three to four weeks from the ages of 2 months to 4 months. It’s repeated one year later, and then given as a booster every three years after that as a part of normal feline veterinary care. According to Groshong, it protects against three serious diseases:

• Calicivirus — Causes upper respiratory symptoms that may include painful ulcers on the tongue and in the mouth.

• Panleukopenia (feline distemper) — Attacks rapidly dividing cells, especially the white blood cells, which protect against bacterial infections, and the cells that line the gastrointestinal tract. “Symptoms range from severe vomiting and diarrhea, which is often fatal even with aggressive veterinary care, to acute death,” said Groshong.

The rabies vaccine is given just once as a kitten, “usually the same time as the last FVRCP vaccine,” said Groshong. It’s repeated one year later, then every three years after that, regardless of whether or not the cat goes outside.

“The incidence of rabies is increasing around the United States, and it is very important that our dog and cat companions are protected — not only for their safety, but because rabies is a fatal disease in people,” she said. “If a cat is not up-to-date on its rabies vaccine and has known or suspected contacted with a confirmed or potentially rabid wild animal, the local health department and animal control can mandate up to a 180-day quarantine in a veterinary clinic, animal shelter or boarding facility.” She added that since that quarantine is usually very expensive, many cat owners are forced to euthanize their pet.

The feline leukemia vaccine is not part of the core vaccination routine, but according to Groshong, its importance should not be overlooked.

“Ideally, kittens should be tested for FeLV, and, if negative, vaccinated twice, starting at 8 or 9 weeks old. It should then be repeated two to six weeks later. Cats that spend time outside should continue the FeLV vaccine one year later and then every three years, which is the latest guideline from the Association of Feline Practitioners,” she explained. “FeLV is a complex disease, which can range from asymptomatic carriers to fatal multi-organ failure.”

Find a vet near you

Partners for Healthy Pets is a non-profit initiative that works with veterinarians and other animal care companies to ensure animals are getting the preventative health care they need. Visit their website to find a trustworthy vet in your area.