Does Fluffy enjoy your company over the man of the house? According to a study released by the University of Vienna’s Konrad Lorenz Research Station and department of behavioral biology, cats tend to favor a woman’s companionship to a man’s. Find out why he would much rather get Mama’s lovin’ than Papa’s! 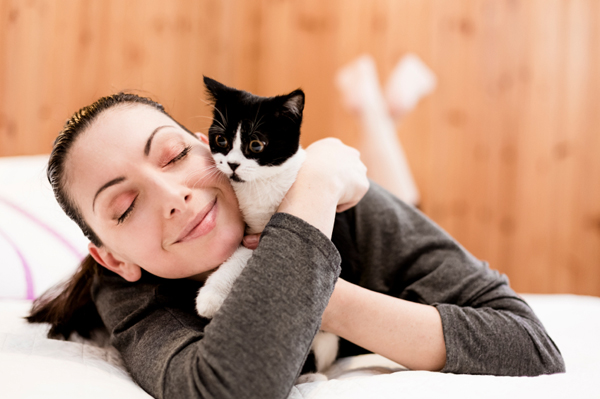 Cats are easy to please: Feed, pet and groom them, and you’ve got yourself a happy feline. And while kitties can love a man just as easily as they can a woman, they tend to go for the lady of the house for five key reasons.

Let’s face it, females just sound more soothing than their male counterparts. And just children respond better to a softer tone of voice, so do kitties. They enjoy hearing a woman’s humming, talking and voice in general, since, as The Daily Cat explains, women tend to vocalize more to their kitty kids. And, the article continues, because a cat’s meow is generally higher-pitched, it is also easier for them to replicate a female’s voice over a male’s and freely communicate with her when they want or need something.

In general, women have softer, more delicate hands than men. When petting a cat, they tend to have a lighter and more soothing pat than what they feel from a man’s larger palm. If a woman pays more attention with her touch than a man does, it is likely the cat will form a special bond with her and hunt her down when he’s in need of another rub-down.

Born with a natural instinct to care for and nurture a baby human, women are likely to do the same with cats. The most important of any pet’s needs is to be fed, which the woman of the house is most likely to do for the cat, according to Discovery News, so the person who feeds him is most likely the one who will win his affection. Also, a woman’s ability to care for and love the cat in a motherly fashion will remind the kitty of his own mother, hence, show more love to the lady of the house.

Just as a dog is a man’s best friend due to his love of the outdoors, athletics and being a bit on the dirtier side, the feline is a female’s companion. Because they like cleanliness and like to groom, cats and females have a lot of the same personality traits. And like any good BFF, a cat will choose his or her human comrade based on parallels and ability to get along.

According to Discovery News‘ report on research on cat and human behavior, the No. 1 reason a cat likes female humans is because women tend to spend more time with cats. And the more attention they get from a person, the more likely they are to give the same amount of loving right back. Just like a human relationship, the more love and attention you give your cat, the stronger the bond and intensity of the connection.

Tips to strengthen your kitty bond