Comparing how a celebrity dresses off duty (when their stylist isn’t on call) to how they dress on the red carpet reveals a lot about who they really are. 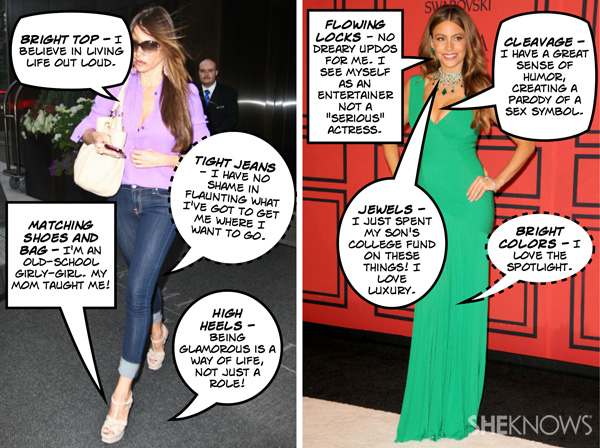 Unlike most actresses who are barely recognizable out of character, Sofia Vergara is always in character and always dressed to the nines! Unashamedly glamorous, she would not dream of leaving the house without her hair ‘done’ and without putting on her ‘face.’

In contrast to many celebs who want to disappear when they’re off duty and dress in all black, Sofia is very comfortable in the spotlight and loves to stand out from the crowd. Her strong personality and love of life is reflected in her consistent use of bright colors.

Her super tight clothing and sky-high heels reflect the ease in which she’s embraced her sex symbol status. She’s one actress who isn’t afraid of ‘working it’ and using her enviable assets to get what she wants. The overtness of her va-va-voom clothing speaks not only to her sense of self (not trying to be another stick figure Hollywood actress), but also her sense of humor, as if parodying herself as the real life Jessica Rabbit. 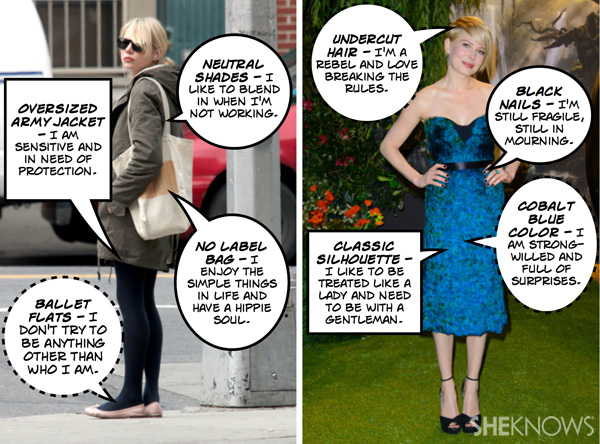 Michelle Williams’ love of whimsy and surprise is evident in both her off-duty and red carpet looks. In both, she errs on the side of understated which reflects her inner shyness. Yet both her real life and runway looks always have unexpected detailing or combinations — be it contrasting fabrics, a quirky print, pop of color or a wild up-to-there slit in an otherwise conservative, covered up gown or outfit. This shows her complexity. On one level she’s shy, almost introverted, and then she has this wild, rebellious streak that only expresses itself occasionally but is ever present.

Michelle doesn’t like showoffs but needs a man more extroverted than her to bring her out of her designer shell. At the same time, she desperately seeks privacy and a man (or cardigan) she can hide behind when the world gets to be too much for her.

Michelle may be soft-spoken, but she is as strong-willed as anyone you’ll likely meet. Don’t try imposing your beliefs on her. When Frank Sinatra sang, “I did it my way,” he could just as easily have been singing it about Michelle’s attitude to life.

How stars dress when they undress
Celebrity moms: What their outfits reveal about their parenting styles
The secret to all-American style and how to get it