Is Carrie Underwood the next celebrity to build a beauty empire? She’s launching a 14-piece nail polish collection this winter in collaboration with Nicole by OPI. 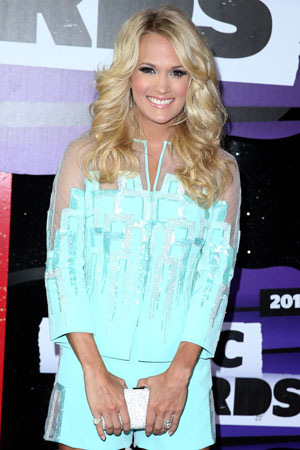 Carrie Underwood always looks totally put together, right down to her manicures. Soon we’ll be able to capture a least a little bit of her sophistication with her new nail polish line, produced in collaboration with Nicole by OPI.

The 14-polish collection — out in January 2014 — will feature a colorful mosaic of hues ranging from soft pastels to dark, sultry shades to playful glitters.

The line will include a signature texture shade called Carrie’d Away, inspired by the singer.

“This is the first time Nicole by OPI has ever designed a signature shade for one of our celebrity partners! We are excited to share this news with both music and nail fans — isn’t that everyone?” said Suzi Weiss-Fischmann, Nicole by OPI’s executive vice president and artistic director.

This is the same company that came up with the Katy Perry Shatter nail polish, so we can’t wait to see what it came up with for Underwood’s signature shade.

“In working closely with Carrie, we came up with 14 nail lacquers that truly encapsulate her soulful spirit and showcase different facets of her personality,” Weiss-Fischmann added. “With shades as American as Apple Pie, you’ll get Carrie’d Away by her Southern Charm!”

The collaboration is a natural next step for the country queen: She recently told Marie Claire that she was obsessed with glitter polish as a teen.

“When I was young, I was crazy about glitter nail polish. I would put a different color on each finger,” she joked to the magazine.

Let’s hope there’s at least one glitter shade in the collection… for Carrie’s sake, of course!

Are you excited for another celebrity nail polish collection? Sound off below!