Keep your washer and dryer smelling fresh and clean with these tips. 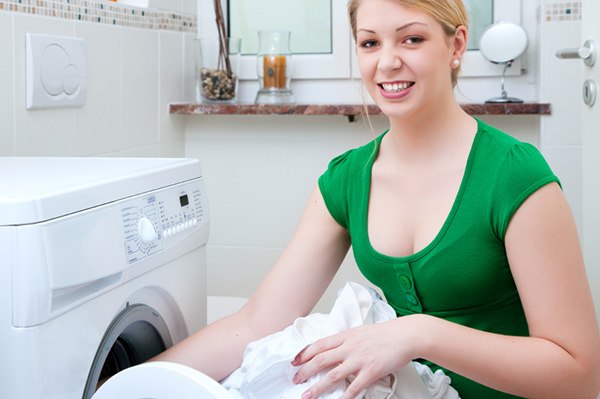 Unpleasant odors in your washer and dryer will cause your laundry room to take on a nasty smell, and that smell will also transfer onto your laundry, causing your clothes — and you, when you wear them — to smell less than pleasant. Nip those odors in the bud by taking steps to prevent odors in the first place.

It’s great to use cold water to save money on your laundry, but hot water kills odor-causing bacteria. Wash a load in hot water at least once or twice a month to keep sour odors at bay.

Fabric softener may make your clothes smell heavenly, but it starts to work against you over time. Softeners leave a residue behind that becomes a breeding ground for mildew.

If you’re not going to use your washing machine for a day or two, leave the door open to let it air out. Even when it appears that your machine is empty, it’s likely there is still a significant amount of wetness under the basin. Keep the door open to let those parts air-dry and stay free of musty, moldy odors.

Once a month, run your empty washing machine through a full cycle on hot, adding in two cups of vinegar. This will stop any bacteria in its tracks and put an end to developing odors.

But here’s a caveat for cat owners: Cats love to jump into front-loading washers and dryers, so make sure to keep kitty out the laundry room when the machine’s door is open. Also double-check that she’s not in there when you close the door or start the machine, as that is deadly for a cat.

You should remove the lint from your lint trap after every load, but deep clean that area at least once a month. Pull out the trap and soak it in hot, soapy water for 10–15 minutes and then gently rub clean with a dishcloth. While lint trap is soaking, use your vacuum cleaner’s extension hose to clean out the lint trap area. Trapped lint may become damp and cause unpleasant odors.

Mix one cup of bleach with one gallon of hot water. Dip a soft rag into the mixture and use it to wipe down the inside of your washing machine once a month. Leave the door open and let it air-dry.

Dampen a few towels with vinegar and run them though your dryer. The vinegar will eliminate any developing odors.

Eliminating odors in your home
How to get a man to do housework
What’s living inside your vacuum cleaner?

3 hrs ago
by Brittany Leitner