Sarah Jessica Parker talks about her new Manolo Blahnik collection in Harper’s Bazaar, and we can’t wait to snap up a few pair when the collection hits shelves later this year. 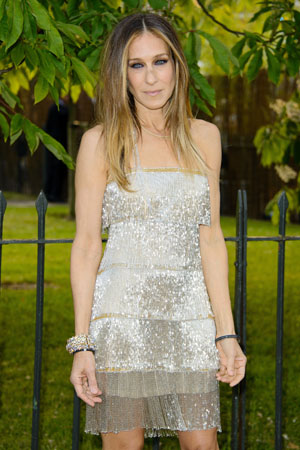 It only makes sense: The Sex and the City star put Manolos on the map as a must-have in every woman’s shoe collection. It also doesn’t hurt that she’s turned into a fashion icon with high-powered fans like Vogue editor Anna Wintour.

“She has a fan base in the fashion world that’s extraordinary, and it’s truly because she’s such a nice person,” Malkemus told Harper’s Bazaar of why he decided to collaborate with SJP on the line, due in Nordstrom’s stores this fall. “Were it anyone but Sarah Jessica, I wouldn’t have done it.”

The collection will reportedly include shoes, bags and trench coats styled with a grosgrain motif.

“That hasn’t been used in shoes in a long time,” Malkemus added to the magazine.

As for Parker, she’s really stoked about all the design choices available to her now.

“The shoe business is so exciting because we don’t have to think of black and brown as the only neutrals anymore,” Parker told Harper’s.

She also told Vogue last month that the line will include some ’70s and ’80s influences.

“We’re putting new colors together that people don’t typically do, just beautiful combinations that you wish existed in your closet,” Parker said in July. “And in terms of bags, thinking about that period of the seventies into the eighties, what those women were carrying, taking away the bells and the whistles and hardware and really making it about the bag.”

And it sounds like the collaboration is going a lot smoother than her last fashion gig.

“I really did work for free,” she told Harper’s of working as Halston’s creative director.

She left the position in 2011, hinting that the “culture” inside the legendary fashion house was too difficult to change.

“We’ve all worked with complicated people and I always think that I can disarm them,” she said. “I love collaborating. I’m a great listener and learner, and I don’t think I know more than they do. I’m transparent.”

Despite all of her fashion cred, SJP says she’s not that into fashion.

“I never dress up that much,” she told the U.K. Daily Express. “These days, I’m lucky if I go out to a friend’s house. Most of my day is spent as a mother, which requires an entirely different wardrobe.

“Although I appreciate beautiful clothes. I’m not into fashion as people expect me to be.”

We’re not buying it, Sarah Jessica!

Will you buy Sarah Jessica Parker’s Manolo Blahnik collection? Sound off below!

Ke$ha’s awesome jewelry line is already selling out
Kate Middleton’s other post-baby dress sells out, too
Katie Holmes wants to create her own fragrance!