Dianna Agron went to Italy as a guest of Louis Vuitton, and we’re pretty jealous. 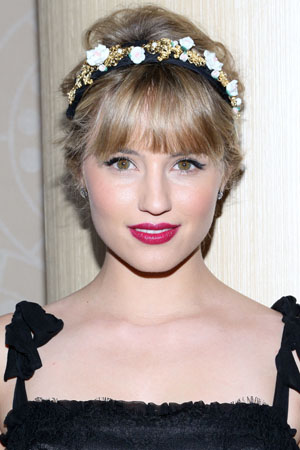 Dianna Agron has been one of our style crushes ever since she first sashayed onto the scene in Glee. It’s hard not to fall in love with her flirty, girly style and consistently adorable hairstyles, but apparently she never really thought much about fashion… until recently, that is.

Related story Have you seen Dianna Agron topless yet?

“I have to be honest; I didn’t use to be the kind of girl who’s into luxe, extra-ordinary shoes or clothes,” she told Glamour. “For one thing, I couldn’t afford them, but looking back, I think that was only part of the reason.”

The 27-year-old actress went on to explain that she had a bit of an epiphany after watching Audrey Hepburn cry while Fred Astaire photographed her in the classic film Funny Girl.

“I couldn’t help but think of that cinematic moment when I was seated front row in Paris at my very first fashion show, the fall 2012 Louis Vuitton ‘train’ show, where the venue was transformed into an old-timey train station,” she recalled. “Taking in all the glitz and glam, I felt transformed too. From that point on, fashion was going to play a big role in my world.”

And apparently, fashion wants to be a big part of her world, too. Agron — who stars in the upcoming film The Family with Robert De Niro — went to Venice, Italy, as a guest of Louis Vuitton. Basically, she lived our fashion dream, and it was everything she dreamed it could be… and more.

“I’m usually low-key, but when LV dressed me, I felt somehow mischievous and fabulous at the same time,” Agron said. “But also, when I wore those gorgeous dresses and heels, I was reminded that, as an actress, the style choices I make influence how directors think of me. There’s power in fashion.”

Move over, Blake Lively and Sarah Jessica Parker: It sounds like we have another designer muse in the works!

Do you like Dianna Agron’s style now, or are you excited to see her embrace couture fashion? Sound off below!