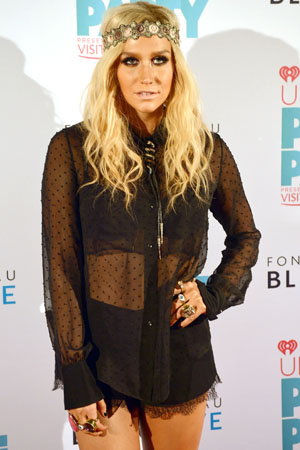 The line — a collaboration with Charles Albert — is full of pieces perfect for the 26-year-old and her legions of Animals. The line’s most (ahem) interesting pieces are the phallic necklaces and the tooth rings, but the collection also includes plenty of beautiful (and SFW!) pieces made out of turquoise, quartz and mother-of-pearl.

And it’s selling out — fast! The $285 Kesha Rose Wonderland Cuff is already sold out, and plenty of pieces are down to only a couple dozen in inventory, according to the website.

Mostly, we’re just in love with this line because it’s so perfectly Ke$ha. It’s pretty obvious that some celebrities don’t do anything but lend their name to a line they “designed,” but we know Ke$ha had everything to do with her jewelry collection.

Her fans are even a part of the collection: The teeth used are real teeth, sent from fans after she put out the call in a 2011 tweet.

So, it’s entirely possible that fans are buying back their own teeth when they pick up something from the Kesha Rose collection.

Will you wear any of Ke$ha’s new jewelry? Sound off below!

Kanye West wants you to buy a $120 T-shirt
Emily Maynard dishes on her jewelry line
Kate Middleton’s favorite boots are on sale again!

18 hrs ago
by Kenzie Mastroe