Jennifer Aniston looks stunning in pretty much everything she wears, but the actress admits she really just wants to wear jeans and tank tops all the time. 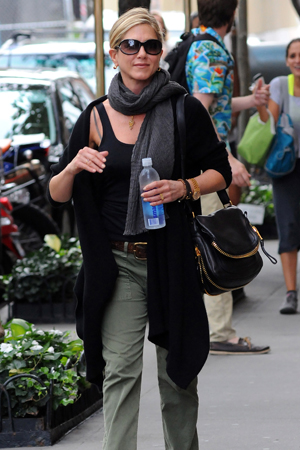 Jennifer Aniston is probably our favorite fashion icon, mostly because she always looks so comfortable. The actress — starring in the upcoming We’re the Millers — admits in a new Glamour interview that she prefers to be “pretty basic” with her fashion.

“I pretty much have my uniform. A boyfriend jean, a wedge, a tank top,” she tells Millers co-star — and Glamour interviewer — Jason Sudeikis.

She goes on: “At night, I change the tank top to black and add some chains. Even on the red carpet, it has to be comfortable. I usually try to get some form of a T-shirt that looks like a gown. Like a longer tank top. A tank top, but with glitter on it.”

It sounds like Aniston‘s style hasn’t changed much since her teen years — she even admits that she’s still holding on to her favorite wardrobe items from years ago.

“I have clothes from high school,” she continued. “Clothes from when I was 19, even from when Friends started. My Levi’s that have holes in them, that I’d fold up, and I’d wear with these little red loafers and a black button-up shirt. And it was stylin’.”

The one thing that’s definitely not basic: her stripper wardrobe for the comedy, out Aug. 7. Aniston went to really big lengths to keep her privates private during filming.

That was some major strapping and organizing,” she told Access Hollywood of a scene that features her in a bra and underwear.

“I had no taping. I really just doubled my bras. I had a thong and then two pairs of underwear,” she continued. “Why I thought that was going to help protect anything is beyond me. Because, that’s just like ridiculous… I was like, ‘No, I need three bras! I need three bras because God forbid that one, if it’s gonna escape!'”