Miley Cyrus is getting quite the reputation for her envelope-pushing style, but she just revealed that she’s inspired by street style… and the Olsen twins! 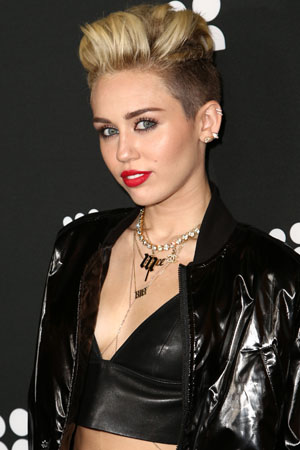 We have the Olsen twins to thank for Miley Cyrus’ eclectic fashion sense… albeit indirectly. The “We Can’t Stop” singer told Harper’s Bazaar that fashion moguls Mary-Kate and Ashley Olsen inspired her as a tot.

“I’ve been obsessed with the Olsen Twins since I was five. I’ve seen every movie; literally you could ask me any movie [and] I’ve seen all of them,” she said. “And then they actually did like a school of fashion when they were 10 or 11 and they were wearing the same exact thing, they were wearing the most amazing clogs and I was dying. It was my time when I was going to school and I was like, ‘I have to get those clogs right now.'”

OK, so maybe the Olsens didn’t exactly inspire the former Disney star to stop wearing pants. Her style evolution from Hannah Montana to punk princess is something that just happened.

“I sit and look online at blogs just all night while I’m falling asleep and that’s kind of I think why — you know how when you read something at night it just kind of like settles into your brain? I think that’s what happened to me. All of it’s in there,” she continued.

However, we don’t think the fashion bloggers can take credit for her favorite accessory: the mouth grills she’s been sporting as of late.

“I’ve got three,” she said before popping in one of her favorites. “This is my chic one… this is my ‘chill grill'”

Does Miley Cyrus’ style inspire you? Sound off below!