Kate Middleton fans descended on Jenny Packham’s website minutes after the duchess made her post-baby debut on Tuesday, hoping to get their hands on the same crepe de Chine dress. 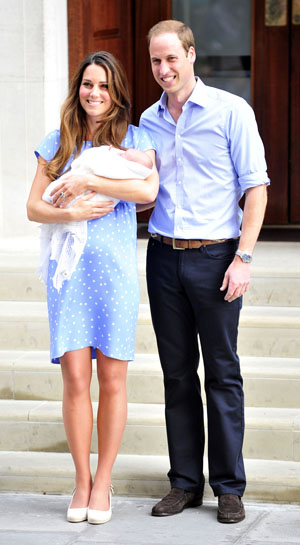 Sorry, Duchess of Cambridge fans: The blue polka-dotted dress she wore to introduce son George Alexander Louis to the world isn’t for sale. However, that didn’t stop hopeful women from crashing the Jenny Packham website in hopes of picking up the lightweight crepe de Chine creation.

A spokeswoman told the U.K. Telegraph that the dress was a one-off creation made specifically for Kate Middleton. It’s the designer’s ninth time dressing the duchess. Packham’s most notable design for Middleton — until now — was the sparkly pink dress she wore to a charity gala in 2011.

“We were contacted by phone and told Kate would like to pop in. Was that good for us?” Packham told The Telegraph of the evening gown. “And we said, fine, great. Luckily we had the new collection here — it’s inspired by film noir: Forties, femme fatale — and she liked the style.”

“The world stopped for five days,” Packham added of creating the ornate dress.

Along with the blue dress, Middleton wore $130 cream-colored Imperia espadrille wedges by Pied a Terre, but a quick look at the company’s website shows those shoes are also sold out in every size except 6/39, and they are only available in red.

Another thing you can’t buy from yesterday’s big debut? The $25 muslin cloth Prince George was swaddled in when he made his debut outside the Lindo Wing. The bird-print cloth — designed by American company aden + anais — sold out within minutes, according to The Telegraph.

“We are truly grateful and so delighted that the couple chose to debut the prince in aden + anais, it is such an honour!” aden + anais founder Raegan Moya-Jones told the newspaper. “We wish the Duke and Duchess of Cambridge many congratulations on the birth of their son.”

Do you think Kate Middleton made the right choice for her first post-baby fashion look? Sound off below!