The average bra size is getting bigger in the United States, but that doesn’t mean our boobs are. How is that possible? Let’s explore. 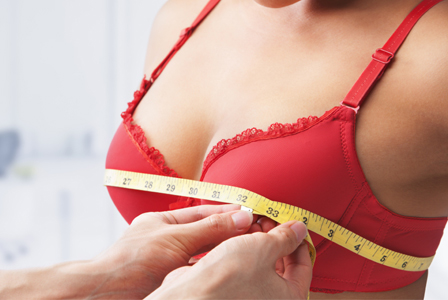 Look down at your chest for minute. See that cute bra you’re wearing… the one that fits perfectly? You have Oprah Winfrey to thank for that. The bra industry grew by $700 billion a year after the talk-show queen focused on proper bra size during a 2005 show, according to Kate Terhune, public relations and marketing manager for lingerie brand Intimacy.

And yes, we definitely need the education: The average bra size has increased from 34B to 34DD in the past 30 years, according to a study conducted by the brand.

The reason? We’ve finally learned the art of bra sizing.

“More woman [sic] actually know what bra size they are wearing now,” Terhune told Glamour. “It’s not necessarily that women’s breasts are growing. I mean, diet and exercise play a part in it but women are just more educated and have more options.”

Basically, we’ve learned to stop stuffing our “girls” into two-sizes-too-small bras just because that’s what we think we’re supposed to wear.

Still not sure if you’re wearing the right size bra? Jockey is also getting into the fitting game with its new Bra Fit Kit. The lingerie brand said the at-home measuring system took eight years to develop, but the system has been criticized by bloggers for being way too confusing.

“One thing that worries me is that they aren’t relating cup size to band size,” The Bra Crusader blogger Charla Welch wrote in a recent review. “I’m not sure how well that will work in real world practice. It’s a great idea, but is my 9 cup with a 32 band going to be the same as someone else[‘s with]… a 9 cup and, say, a 38 band? Will the underwire be adjusted for that difference? Because, in real practice, a D in a 32 is very different from a D in a 38.”

You don’t need a special kit to measure your bra size, though. It’s actually very simple to measure your size at home — and any dedicated bra retailer should have staff who can do it for you.

Did you start wearing a bigger bra after getting measured?