Add Shailene Woodley and Kim Kardashian to the list of celebrities who don’t like to wear makeup all the time. Seriously! 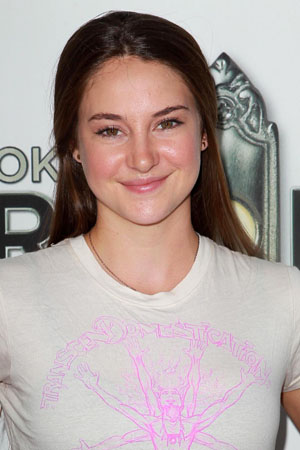 It’s hard not to love it when celebrities step out in public — or onto Instagram — with a makeup-free face. However, few are willing to step on the red carpet without some powder or blush.

Not Shailene Woodley: The actress — who was recently cut out of The Amazing Spider-Man 2 — recently revealed that she doesn’t like to wear makeup.

Her reasoning is pretty rad, too.

“It’s important because I saw somebody — what I thought was me — in a magazine once, and I had big red lips that definitely did not belong on my face. I had boobs about three times the size they are in real life. My stomach was completely flat. My skin was also flawless,” Woodley told pal Emma Stone in the new issue of Interview magazine. “But the reality is that I do not have those lips and my skin is not flawless and I do have a little bit of a stomach. It was not a proper representation of who I am.”

The 22-year-old actress realized that her young fans see those photos and get the wrong idea of what beauty should be like. So, she’s doing her part to change it.

“I realized that, growing up and looking at magazines, I was comparing myself to images like that — and most of it isn’t real. So (a) I don’t really wear makeup that much anyway, so part of it is just a selfish, lazy thing, and (b) I want to be me,” she added.

“I do think it’s fun sometimes to dress up for the Oscars or for certain events — I get to be like a five-year-old again, wearing my Cinderella dress,” she continued.

Woodley isn’t the only celebrity who admits that a face full of makeup isn’t everything.

“He loves the dress-up aspect, but he also likes me without makeup on,” she told the website.

But Kardashian probably won’t ever give up her favorite makeup item from her new Khroma makeup line: Intimate Spotlight Illuminate.

“It’s all about light and shadow; highlight your brow bones with a luminizer and very lightly enhance cheekbones with non-glittery bronzer,” she said of her best makeup tip.

Do you like seeing celebrities without makeup? Sound off below!

Olivia Wilde on beauty: “I accentuate my eyes”
Karmin chats summer beauty and daring style
Gwyneth Paltrow gets her beauty advice from the French