Oops… even celebrities get it wrong sometimes! We’re telling you why Miley Cyrus and Rihanna’s fashions fell short in our weekly feature. Learn from the stars’ sartorial slip ups! 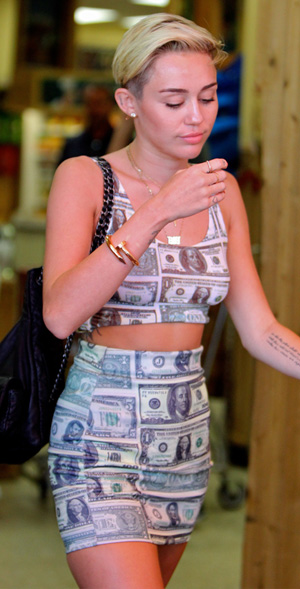 By the looks of Miley Cyrus‘ revealing outfit, you’d think she’s leaving a photo shoot or heading to perform on stage, right? But no, this is actually just what Miley wears to go grocery shopping with her mom. Seriously. Fashion fail in aisle nine!

The “We Can’t Stop” singer chose this cash-printed crop top and short skirt for a trip to Trader Joe’s in Los Angeles. We really can’t believe her mother, Tish, let her 20-year-old daughter out of the house in that! The money-covered ensemble is totally inappropriate for running errands in the daytime. Save it for your next show… or trip to the strip club, perhaps? Where else would you wear a dollar-covered dress?

The final verdict? Sorry, Miley, but you don’t look like a million bucks. We like how you’re not afraid to take fashion risks and change up your style (cute haircut!), but this look is just low-rent. In the words of Countess LuAnn de Lesseps, “money can’t buy you class”… even if you’re wearing it. 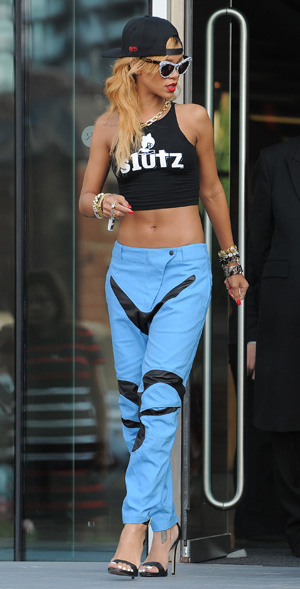 Just like Miley, Rihanna has a rocking body. But unlike Miley, Rihanna bared her abs in this ensemble en route to perform at the M.E.N arena in Manchester. So we give her props for picking the proper place to show some skin, but we’re not on board with the outfit for one major reason.

First of all, the shirt reads “slutz,” which is a tasteless take on the Utz potato chip logo. As a world-famous female, does Riri really need to wear a shirt that says a word that’s demeaning and insulting to women? Why encourage the use of “sluts,” especially when you’re about to take the stage in front of fans that include young, impressionable girls?

The final verdict? We’re also not wild about the plastic-looking pants she’s sporting, but we can forgive them. If she just chose a different top, she’d totally be a do instead of a don’t. Like it or not, Rihanna, you’re a role model, so please think before you get dressed. Thanks!