Kanye West’s new “simple” fashion venture is proving to be a success, despite the huge price tag. 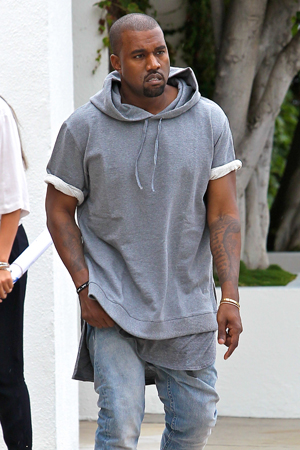 How about $120? That’s how much Kanye West thinks you’ll pay for a plain white tee from his capsule collaboration with French fashion brand A.P.C.

And apparently, he’s right. The collection — which went on sale Sunday at 10:00 a.m. Paris time — immediately crashed the website and sold out soon after. We have to assume it’s the name that inspired people to break out their credit cards. The tiny collection — comprised of only two pairs of jeans, two T-shirts and three hoodies — is monochromatic and expensive.

It’s hard to believe this is what came from the new dad’s months-long collaboration with A.P.C. chief Jean Touitou.

“Over two years ago, a visitor to the A.P.C. studio was announced to me as ‘Kenny.’ He wanted my advice on the fashion industry; although I found such a request quite vague, as a mutual friend introduced us, I met with the guy,” Touitou told GQ after the line was announced in early July.

“He kept asking how he could start something in that fashion industry. This is when we all advised him to start that something in France, and keep quiet about fashion noise while learning about it,” Touitou added. “Over the months, we kept hanging out and finally came up with the idea of doing a small capsule collection of clothes together. ‘Small’ meaning that this capsule collection consists of a jean, a hoodie and a T-shirt.”

Touitou said, “Those are precious to me and to Kanye too, because it took time and thoughts to get there.”

Still want to get your hands on a Kanye Kreation? You’re in luck: A.P.C. is taking pre-orders for the next shipment until Wednesday afternoon.