When it comes to shopping for the perfect bra, turns out size does matter! Peep these quick tips to help you determine if you’re really rocking the right bra size or not. 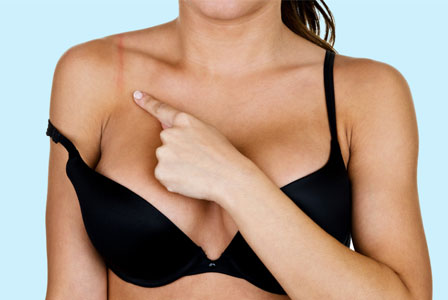 You’re spilling out the sides

Sure, a little bit of cleavage is to be expected, especially if you’re sporting a push-up bra. However, if your breast tissue is literally spilling out the sides of your bra or flowing over the tops of the cups — it’s time to get remeasured, girlfriend! You wouldn’t rock too-small jeans that gave you love handles, would you? So please don’t settle for a bra that’s ill fitting simply because you’d rather be a 34C. After all, it’s just a number and a letter, and no one has to know your size but you.

Your bra is painful

According to fashion expert and author of The Bra Book, Jené Luciani, if your bra is causing you pain in any sort of way, then it definitely doesn’t fit right. The straps shouldn’t dig into your shoulders or fall down, although this may just be an adjustment problem, she notes. Check for red marks and indentations on your bod after you take it off as well. This is a surefire sign of a wrong fit.

The underwire cuts into your breasts

Having some underwire issues? Don’t worry, you’re not alone. Many women own — and believe it or not, continue to buy — bras that are too small, resulting in the underwire cutting and digging into the underside of their boobs. Ouch, so not comfy!

“The underwire should be flush against your ribcage beneath your breasts,” explains Luciani. “If it isn’t touching your ribcage, this doesn’t mean you necessarily need a bigger band. More than likely, you just need bigger cups.”

The band of your bra rides up

A band that rides up your back is a big, big red flag! Surprisingly, a lot of smaller-framed women tend to have this problem because (often due to a lack of options) they buy bras with bands that are too large for their petite figures.

“Your band should be cozy yet snug, plus you should be able to slip one or two fingers beneath it,” points out Luciani.

As a rule of thumb, the right band ought to be somewhat level all the way around your body.

“It should also fit nicely on the middle hook,” says Luciani, “letting you extend to the outer hook if you gain some weight and the inner hook if you lose a little.”

There’s a gap in between your boobs and bra

You know it’s time to size down when you notice baggy, gaping or wrinkly cups, says Luciani. Moreover, there should be no gaps in the front, either. Instead, the fabric between your breasts should lie flat against your skin. If it doesn’t, you’re probably wearing the wrong-size band.

Your health is starting to decline

While health problems can be triggered by a number of things, both serious and less so, a wrong-fitting bra has been linked to several major and minor conditions, including back pain, indigestion, restricted breathing, poor posture, headaches and neck pain.