Taylor Swift and Kendall Jenner both showed off their best bikini looks over the Fourth of July weekend. Our question: Who pulled off patriotic the best? 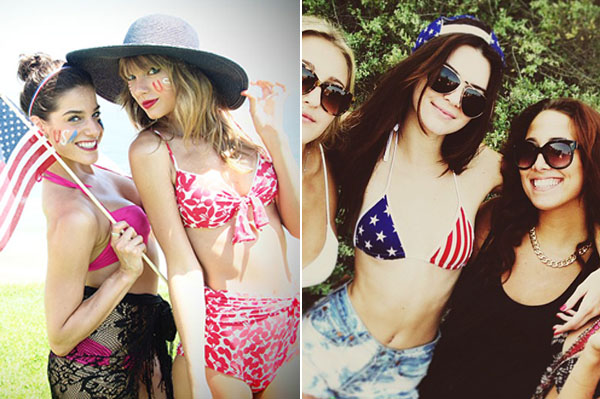 Are you over your holiday hangover yet? We’re not — and seeing all of the fun Fourth of July shots from our favorite celebrities make coming back to work that much more difficult.

And why wouldn’t it? Celebs like Beyoncé used Tumblr, Instagram and Twitter to show off their holiday spirit. But it was Kendall Jenner and Taylor Swift who really made us jealous: The pair each gave us a glimpse inside their raucous celebrations — complete with plenty of party photos.

“Independence Day is one of my favorite holidays of the year,” Swift wrote on her blog post, which showed off over a dozen shots of the “Red” singer in her high-waisted bikini and patriotic face paint.

She continued: “This time around, my touring family joined me at the beach and I wanted to show you some of the pictures because you’re the reason we all get to be on tour together. You’ve seen us all in our show costumes on the Red Tour… Here’s what we all look like in RED, white, and blue:).”

Aspiring model Jenner also tweeted about her “amazing fourth” — and she really got into the spirit with an American flag bikini and ball cap, topped off with acid-wash jean shorts.

No one celebrated the Fourth of July better than German transplant Heidi Klum, though. The America’s Got Talent judge showed off her patriotism — and her bum — on Instagram.

“Ouch,” she wrote on the shot of her sunburn.

Who had the better Fourth of July bikini: Kendall Jenner or Taylor Swift? Sound off below!