Kanye West is dipping his toes back into the fashion-designing waters with a new capsule collaboration with French brand A.P.C. 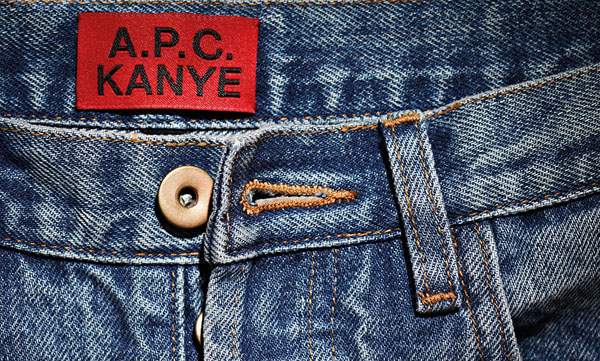 Baby North West isn’t Kanye West’s only collaboration this summer: The rapper is teaming with French label A.P.C. to release a new line later this month.

“A.P.C. KANYE CAPSULE COLLECTION JULY 14,” the brand tweeted on Monday, along with a tease of the line’s label.

West also added his own note on the line via Twitter.

“Thank you Jean Touitou for letting me create with you,” he wrote.

We’re not exactly surprised that the Yeezus rapper is putting out a new line. There have been rumors of a West/Touitou collaboration for months — and he basically confirmed it in a June interview with W magazine.

“The first collection was way better than the second,” he says of ill-received fashion lines he introduced at Paris Fashion Week in 2010 and 2011. “It was more artful. It was 30 collections in one. It just takes time for me to slow down and think like a normal person.”

“I have to somehow put out something that says, ‘I look sensible!'” he added.

Enter the A.P.C. collection: The line will reportedly feature jeans, T-shirts and hoodies — a staple in many guys’ closets.

Sounds a little boring, but the way the collaboration came about is anything but.

“Over two years ago, a visitor to the A.P.C. studio was announced to me as ‘Kenny.’ He wanted my advice on the fashion industry; although I found such a request quite vague, as a mutual friend introduced us, I met with the guy,” Touitou told GQ.

Eventually the chic French designer found out that his name was “West. Kanye West.”

“He kept asking how he could start something in that fashion industry. This is when we all advised him to start that something in France, and keep quiet about fashion noise while learning about it,” Touitou continued. “Over the months, we kept hanging out and finally came up with the idea of doing a small capsule collection of clothes together. ‘Small’ meaning that this capsule collection consists of a jean, a hoodie and a T-shirt.”

The designer added, “Those are precious to me and to Kanye too, because it took time and thoughts to get there.”