We don’t usually think too much about bras unless clothes are coming off or something goes terribly wrong. Look no further — we have the good stuff: 10 true and mortifying stories of bra-wearing disasters. 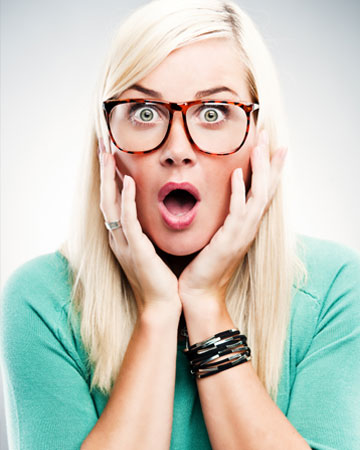 Lesson learned: Give your pasties some air.

“I was going through a phase of wearing a lot of backless shirts, which required me to go braless or wear a stick-on bra. The stick-on bra I owned had to be rinsed and air-dried after use so it would keep its adhesive. Well, one day, it wasn’t dried properly but I still put it on. Turns out that was a bad idea. Two hours later, I abandoned my pasties in a Wal-Mart parking lot because they reeked of mildew!”

“A regular occurrence when you’ve got ‘ladies’ the size of mine is the inevitable underwire escape. You know how it goes: That little covering eventually gives way, and all of a sudden you’re standing in the hallway at work and your underwire has not only slipped out of your bra halfway but is now protruding through the top of your shirt! But you don’t notice until your male colleague happens upon you and asks, ‘What is that?!'”

Lesson learned: Make sure your front closure is in good working order.

“When I was in high school, I had a front-closure bra that I just loved because it made my boobs look so perky. I think I wore it too often. One day in class, the front clasp came permanently loose, and I had to figure out what to do with my weird bra/vest for the rest of the day with no way to keep my girls tucked in.”

Lesson learned: Have a backup plan.

“I own a yoga shirt that has a built-in bra, and I sometimes wear it for running. I have a small chest, so it’s not a big deal. But I didn’t notice that one of the metal rings that held on the straps was starting to fray the strap. When I was out jogging, the bouncing caused the frayed strap to give way — and I flashed everyone on the jogging trail with me.”

Lesson learned: Don’t stuff your bra when a frontal impact is inevitable…

“Most embarrassing moment of my life. I was 12 and stuffing my bra. I stuffed my sports bra during a basketball game, and the first time I made contact with someone during the game, two socks came flying out the top of my jersey. Awesome.”

Lesson learned: But definitely stuff it when you’re breastfeeding.

“I was still nursing my 4-month-old when I started doing yoga again. Let’s just say that the smushing of my breasts against the mat caused a big mess, since I accidentally forgot to put my breast pads in my sports bra.”

“One day I squeezed into a bra that was probably a size too small and put on a shirt that was a little low cut. I couldn’t figure out why people were staring at me all day. In retrospect, it was probably because my nips were popping out the top of my tiny bra and practically poking onlookers in their eyes.”

“I hate doing laundry. Well, one day I didn’t move my clothes from the washer to [the] dryer, and they mildewed. I thought I fixed the problem by rewashing them, but upon wearing my bra the next day, I discovered that body heat brings back the mildew smell. Imagine how mortified I was at work to discover I was the smelly one.”

“I love beautiful bras, but I totally don’t love it when I wear a beautiful bra with a shirt that appears to provide full coverage only to realize that the shirt is completely sheer when a camera flash is used!”

Lesson learned: Make sure your strapless bra is up to the task.

“On my first date with my now-husband, we went dancing at a country bar. I was looking great in a halter top with a strapless bra… until he started to spin me. When my arms went over my head, that bra dropped like it was hot.”

Monday Mom challenge: Get a bra fitting
The complete guide to measuring your bust size at home
Morning, noon and night: Be comfortable in your bra all day

Calling All Dyson Owners: You Can Get 20% Off a Vacuum, Hair Dryer, or Air Purifier Right Now