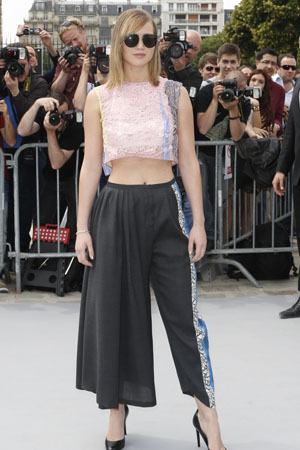 Jennifer Lawrence wowed us in the pink Dior gown she wore to the 2013 Academy Awards, but we’re kind of scratching our heads at her latest Dior ensemble.

The Silver Linings Playbook star struck a seriously fierce pose at the Christian Dior Couture fashion show in Paris on Monday, wearing a ruffled crop top and a pair of trousers that looked like a pleated skirt on one side and print pants on the other.

Let’s talk about this for a second.

Our first reaction was “um, no” — but now they’re starting to grow on us, mostly because the face of Dior looks seriously confident in it. It seems like Lawrence is just made for high fashion, but the hilarious actress once said she’d rather wear sweatpants to the Oscars — and that she hates shopping.

“I don’t really care about clothes, to be honest,” she told Hello in 2012. “I mean, when I’m on red carpets I’ve started to become more vocal about the things that I want to wear just because it’s better to look at photographs later and like the dress I was wearing, rather than see myself wearing something I was told to wear and which I hate.”

As for her downtime style? It’s all about comfort.

“I go out like maybe once a year and just buy a bunch of stuff to stock up on, and that’s it,” she continued. “I used to live in sweatpants until I started being followed by photographers, so these days I have to start putting on makeup and wearing proper clothes every time I leave the house, which is definitely a change for me.”

Do you like Jennifer Lawrence’s Dior pants? Sound off below!