Miley Cyrus and The Vampire Diaries star Kat Graham both wore the same Versace dress over the weekend. Awkward! 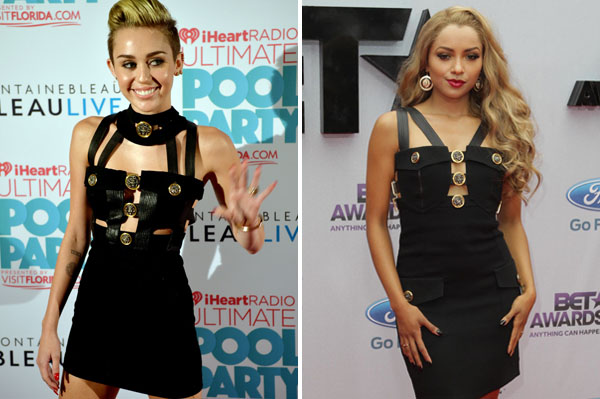 Or at least a skirt: The twerkin’ “We Can’t Stop” singer showed up at the iHeartRadio Ultimate Pool Party over the weekend in a strappy Versace mini dress that showed off her toned-and-taut body.

Then the unthinkable happened: The Vampire Diaries star Kat Graham wore the same dress just hours later at the 2013 BET Awards. The actress vamped hers up with a new blond hairstyle.

Now the big question: Who wore it better?

We have to say it’s a tie. Both actresses are fiercely independent with their style, so the idea that both went for this dress isn’t that surprising. However, we doubt they’re thrilled to see each other in the same look — especially since Graham prides herself on her original style.

“People automatically assume that because you’re an actor, you’re a blank canvas 24/7. But I can’t wear what everyone else wears,” she told MTV Style in 2011. “If I went to an audition, I’d wear what the character would wear, but the moment I’m done with the audition or done filming, I go back into my high-waisteds.”

Maybe you and Miley need to start coordinating outfits, Kat.

Blue Ivy Carter has Tom Ford heels (and you don’t)
Short for summer: Jada Pinkett Smith & more chop their hair
Emma Watson: I only own eight pairs of shoes