Is it bad to be jealous of a toddler? ‘Cause we are — mostly because she wears custom Tom Ford heels. 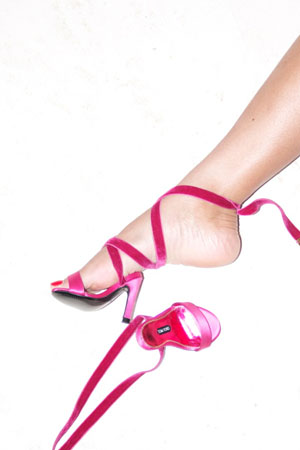 The 1-year-old has the world’s coolest parents in Beyoncé and Jay-Z, who give her access to things we can only dream about.

Beyoncé showed off the tiny pink heels customized with velvet ribbons on her Tumblr Friday. Bey also showed off a typical day in the life of Blue Ivy, complete with Blue Ivy in a crown, Blue Ivy’s ruffled dress and Blue Ivy tenderly touching her mom’s nose.

Back to the heels: These adorable little creations have to be one of a kind since Tom Ford isn’t exactly in the children’s business. Yes, we’re jealous: The only heels our moms gave us as tots were the slippery plastic toy kind that never stayed on our feet and caused some serious blisters.

Not that we’re bitter or anything.

Blue’s luxe little heels are just par for the course in her fabulous life. After all, this is the same girl that’s lived in a $1.5 million nursery since birth, reportedly outfitted with a $600,000 rocking horse.

She’s so fab that even adult celebs want to have her life.

“I’d definitely want to raid Blue Ivy’s wardrobe more than Beyoncé’s,” singer Rita Ora said recently. “It’s probably, like, bigger than both of their wardrobes put together. That’s the wardrobe I wanna be in!”