Break out the credit cards! Kate Middleton’s go-to boots are on sale again. 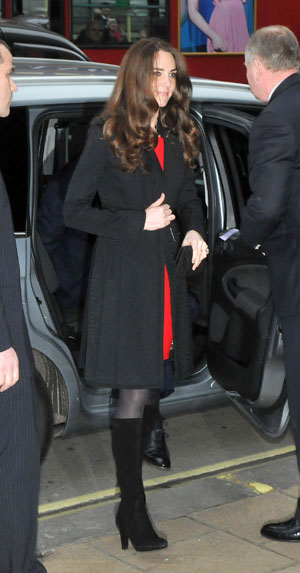 Kate Middleton might be preparing for having a baby, but her fans are prepping their credit cards in hopes of getting their hands on a pair of her favorite boots.

The Duchess of Cambridge, 31, is routinely spotted wearing a pair of Aquatalia’s black Rhumba boots during her various public appearances, including an impromptu polo match in March. The “Kate effect” quickly took hold — and the entire production run sold out in days.

“When the Rhumba was first issued we had no idea it would be such a success, so the production was small,” Rena Krasnow, fashion director at Aquatalia, told Fashionista.com.

That was before the duchess. Sales soared — and that’s despite the Rhumba’s $698 price tag.

It’s easy to understand why Kate likes the boots: They’re classically fashionable — thanks to their height and stretchy fabric — and durable enough to take Middleton from the polo field to high tea with the Queen.

Her practicality annoys high-fashion designers like Vivienne Westwood and Matthew Williamson, but Krasnow said Middleton’s sensible approach to fashion is exactly why women love her.

“In my opinion, the most influential style icons today are women who buy their own clothes and wear what they like, not what they are told,” Krasnow told the website, adding that Middleton has shopped with the brand — sans stylist — since 2011.

“Kate Middleton is the quintessential style icon, and her love for the brand comes from a very genuine place. It’s an incredible compliment and endorsement.”

You can get your hands on a pair now at Aquatalia’s website, though you’d better hurry — the boots are sure to sell out when they hit stores later this month.

5 mins ago
by Kay Snowden