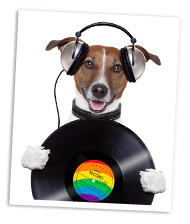 Name your pet after these musical legends

Lollapalooza was Perry Farrell’s way of saying goodbye to his influential and seminal band, Jane’s Addiction. There was no way for him to know at the time the importance and impact his singular farewell would have on a generation of musicians… and now, your pet!

We’ve got some suggestions for your pets, inspired by the music, artists and spirit of Lollapalooza.

With apologies to the artists (badly) punned on below, we can’t help but notice some artists’ names are just perfect for certain types of animals. Try naming your fur baby after one of these influential artists.

It’s not all about the artists, though. Sometimes, a band’s name lends itself to a unique pet name.

If you’re more about the music than the artists, take your inspiration from your favorite song or album title.

Some other music-inspired names