We trim our own nails absentmindedly while watching the boob tube. So why is it so nerve-wracking when it comes to our four-legged friends? Quiet your nerves (and your pooch’s) by knowing how to do it right. 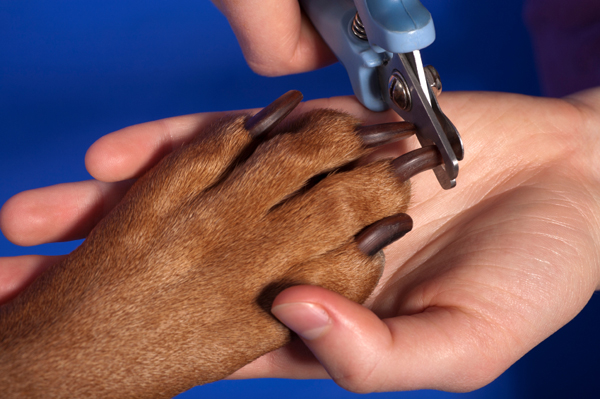 It’s part of being a responsible dog owner, but it can make both human and canine anxious. Trimming your dog’s nails doesn’t have to be traumatic. You just need a little know-how and a lot of patience.

The keys to canine nail-trimming success

According to the ASPCA, there are two keys to success: teaching your dog to associate it with something he loves and taking it slowly.

To associate nail-trimming with things your pooch loves, make sure he gets something out of it every time. Take him on a walk or car ride when it’s over. Give him a new chew-toy or something special he doesn’t get often. Make sure he gets his treat immediately after the trimming is complete.

Also, take it super-slowly. Just do one or two of them at first, then immediately follow it with the treat. A few days later, do a couple more, making sure you remember his reward. Keep going until all the nails are trimmed. After a while and with a little patience, you’ll probably be able to do them all in one sitting.

Don’t force your dog to sit for a clipping and never punish him for a lack of cooperation. This will only create negative associations in his mind. If he’s not into it, back off.

How to trim the nails

Read the instructions for each carefully before using and be prepared to try all three types. Some dogs will recoil at the sound of the powered models, while others fear the clipping-style models.

You’ll also need a clotting powder to stop bleeding in case you accidentally cut the quick; and keep a bag of treats nearby to give between each nail (in addition to his main treat at the end).

To trim, pick up your pet’s paw and touch the trimmers to a nail. Don’t clip, just touch, Then put down the trimmers and give him a treat. Do this several times until he seems comfortable before actually clipping a nail.

Hold the toe of the nail you plan to trim gently, but firmly enough to prevent slipping. Place the tool of your choice on the dog’s nail according to the directions and quickly squeeze to trim (unless using a Dremel-style).

To know where to cut, look for the quick. If the nail is white, you can see a pink quick. If your dog’s nails are black, it will be gray, so we recommend cutting a bit at a time off of the tip until you see a gray or pink oval begin to appear. If you have a helper, someone can shine a flashlight behind the nail so you can see the pink quick. Either way, cut no closer than 2 millimeters from the quick, which is a bit longer than the width of an American nickel.

If you get too close, the quick will begin to bleed. Immediately put down the clippers and use a soothing voice to calm your pet. Then apply the clotting powder directly to the injured area.

If you just can’t handle the stress of clipping or your dog displays aggressive or extremely fearful behavior, both of which could be indicative of a pet who may bite during the process, it’s time to call in a pro groomer. Many vets will also do a trimming appointment for a negligible amount of money. For fearful dogs, always use a vet. Don’t take fear biters to a grooming establishment under any circumstances!