Italian fashion designers Dolce & Gabbana dream up some of the best couture in the world, but they seem to have trouble remembering to pay their taxes. 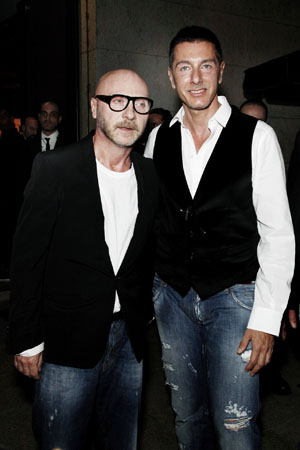 Otherwise, you might end up like Dolce and Gabbana. The designing duo earned a prison sentence — 18 months for both Domenico Dolce and Stefano Gabbana — for tax evasion.

They actually got off easy: Italy’s judge Antonella Brambilla reduced the sentence from a three-year stay.

Italian authorities say the 30-year-old company failed to pay 200 million euros ($268 million) by transferring their company to a Luxembourg-based holding company name Gado, an anagram of their last names, according to the BBC.

So, what does this mean for the label loved by celebs like Madonna, Katy Perry, Kylie Minogue and Stacy Keibler? Not much, actually: The pair received a suspended sentence, meaning they won’t spend a day in jail as long as they stay out of trouble.

Dolce and Gabbana have yet to comment on their conviction, but the designing duo is still chatty about fashion. The company is set to expand into a new London store this month.

“We wanted to add to the DNA of Dolce & Gabbana a little of English eccentricity,” Gabbana told GQ of the fashion inspiration for the new store. “We will present pieces that will only be available in this store, and we thought of taking inspiration from London and the soul of the British gentleman: such as the double-breasted six buttons of the Swinging Sixties.”