Surprise! Kristin Cavallari is a married woman. The former MTV star married Chicago Bears quarterback Jay Cutler in Nashville — and she shared a photo of their wedding bands with us! 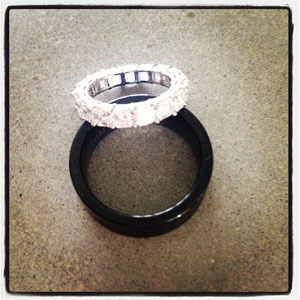 Kristin Cavallari is now officially off the market. The Hills star and her NFL star husband, Jay Cutler, exchanged vows at the Davidson County Clerk’s office in Nashville, Tennessee, on Friday.

“Im officially Kristin Elizabeth Cutler!!!!!” she tweeted after the event, along with an Instagram photo of her diamond wedding band atop Cutler’s all-black ring.

Cavallari will likely pair that diamond band with her huge 5.2-carat engagement ring. That’s a lot of bling on one finger!

The courthouse nuptials came just days after the mom of baby Camden Jack hosted her bridal shower. The bride-to-be — outfitted in a Donna Mizani dress and her own shoes and accessories — had a fabulous time at the Ciroc vodka–sponsored fete at West Hollywood’s London Hotel. 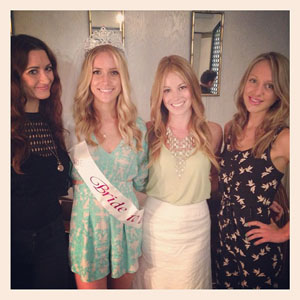 As for the “real” celebration? Cavallari has kept most things a secret, but it will reportedly take place in Nashville this weekend.

“It’s going to be about 150 people, so not huge,” the Laguna Beach star told US Weekly earlier this spring. “I was never the girl who dreamt about my wedding or any of that stuff, but the wedding how we’re planning is exactly what I wanted. I think it’s going to be perfect for what we’re doing.”

As for the dress? We have to wonder if it’ll feature her favorite material for spring and summer: leather.

“I am loving leather,” Cavallari told SheKnows earlier this year. “It’s a fun time of year because now you can start wearing spring stuff and incorporating fun colors.”

Probably not, but we can’t wait to see it!

What do you think of Kristin Cavallari’s wedding band? Sound off in the comments below!