From Draper to dapper, Jon Hamm’s character on AMC’s Mad Men has turned into a cultural phenomenon. With a Twitter and Tumblr dedicated solely to Mr. Don Francis Draper, it begs the question, “Just who is Don Draper?” 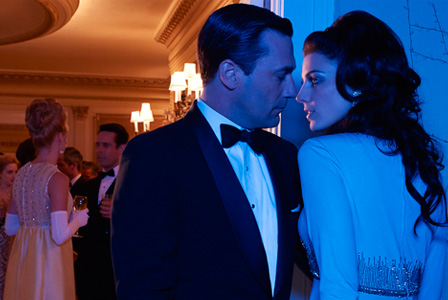 As the character himself tries to figure out that very answer, so does the audience, remaining captivated one hour a week.

A man like Don Draper, who remains elusive and mysterious, can tug at your heart strings in more ways than one.

If you’re dating a Don Draper, you probably already know it. But for the pool of women who are on dating sites, there’s only so much you can tell from reading a profile or even the first date. I had a chance to talk to Sarah Goodling, project manager overseeing all profiles for the world’s largest dating site, PlentyOfFish. She’s analyzed and seen nearly every personality imaginable. An expert in identifying the Don Drapers, Peter Campbells and Roger Sterlings of the world, she had great insight into the question: “Am I dating a Don Draper?”

When a man is too confident and self-assured, as Draper obviously is, there’s no need to sell himself or impress others with a lengthy description. His dating profile will be short, intriguing and leave you wanting more. A man like this lets his sophistication and allure speak for itself. As private as he probably is, it’s a surprise that he even created a dating profile to begin with. As you browse through his photos, expect to see him dressed to the nines, sporting a relaxed country club look, while barely smiling into the camera.

So now that you’ve visually identified your future Draper date, get ready for some fun back and forth messaging. He’ll most likely be brief and to the point, remaining fiercely private, careful not to reveal too much about himself too soon. You might feel a little insecure about your lengthy messages receiving only one or two word responses, but fear not… that’s just Mr. Modern Day Draper talking. Undoubtedly, your messages will not be answered right away, either. Slow to respond is another Draper characteristic, as this ambitious creature works late and courts several women at a time. Still interested? Don’t wait with baited breath for an invitation to go out. This man knows himself and knows exactly what he wants. If he wants to go out on a date with you, he’ll tell you when and where to meet him. Oblige accordingly.

How do you get him?

With all of this power, mental domination and control, how do you get a Draper to fall in love with you? This advice holds true for any type of man: Do not chase him. Men like a challenge, and a woman who is too available and too needy will turn him off or simply put you in his little black book for a rainy day. He likes an intelligent woman, so let that be known from the get-go. If he knows you’re smart enough to see through his polished charms, he may think twice about playing his seducing, bold moves on you. Make sure he knows that you are an intelligent and sophisticated woman that won’t accept anything but love and respect.

On the note of respect, another big no-no for any Modern Day Draper is allowing him to smell your fear or insecurity. If he cancels a date at the last minute, so be it. If he doesn’t return your message right away, remain calm and collected. Despite his distance, both emotionally and physically, Draper likes a woman who is willing to take care of him and his needs. So, continue to be your sweet self. Make him dinner, give him a massage, have fun under the covers and help him up off the floor after a long night of drinking.

After reading all this, are you wondering why any woman would be attracted to a Don Draper? His unwavering sophistication and confidence alone can win over the hearts of most women. But what makes women crazy for him, is the hope that they will be the one to unlock the key to his mysterious heart. Unfortunately, that will never happen. No matter how hard she tries, how close she thinks she is, Mr. Modern Day Draper’s heart remains unattainable.

How to play hard to get
What turns him on and off when it comes to texting
Mad Men dating advice: He said, she said