Parents who put their baby’s pacifier in their mouths may be helping to cut the child’s risk for some allergies. 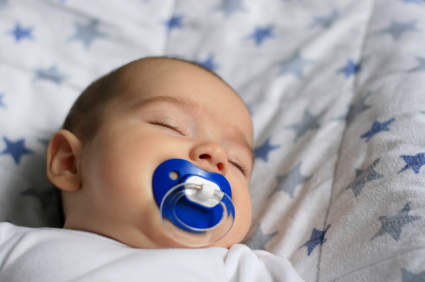 Next time you toss your baby’s pacifier in your mouth to “clean” it, you may also be lowering your child’s risk for allergies.

A new report showed that out of 136 infants who used a pacifier in their first six months, 65 were from parents who reported sucking on their kids’ pacifiers. Of the kids whose parents “cleaned” their pacifiers, both eczema and asthma were strongly reduced when they were examined at 18 months of age. At 36 months of age, the protective effect remained for eczema but not for asthma.

Bill Hesselmar, MD, PhD, of Queen Silvia Children’s Hospital in Gothenburg, Sweden, conducted the study along with his colleagues. The research is published in Pediatrics.

According to their research, transferring oral microbes from the parent to the child could modify the allergy risk. The make-up of the bacteria in the infants’ saliva showed which belonged to parents who did—and did not—suck their child’s pacifier.

“Exposure of the infant to parental saliva might accelerate development of a complex oral/pharyngeal microbiota that, similar to a complex gut microbiota, might beneficially affect tolerogenic handling of antigens by the oral/pharyngeal lymphoid tissues,” the scientists wrote in their report. “Moreover, oral bacteria are swallowed and hence also affect the composition of the microbiota in the small intestine, which may in turn regulate tolerance development in the gut.”

Parents sucking on pacifiers may not look cool, but maybe it’s not as bad as we originally thought.

Scientists produce rat kidney
Most U.S. adults don’t exercise enough
Plan B to be available over the counter