What Megan Searfoss remembered most was how perfect the morning was. The weather, the crowd, the training. She was ready. But the avid runner and founder of the women’s only 5K Run Like a Mother had no idea that the finish line she crossed minutes before would become the scene of a terrorist attack that would shake the nation. 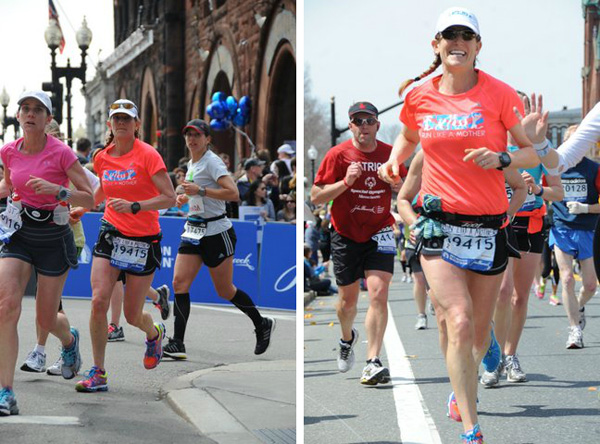 The 2013 Boston Marathon, which was three weeks ago today, would be the fourth for Searfoss, who had run 17 or 18 other marathons prior to that.

“There were several women who are involved with RLAM who were going with me to run the race,” Searfoss said, referring to the acronym for her Run Like a Mother race.

Her RLAM tribe is one that has grown since the inception of the Mother’s Day 5K five years ago. And many of those women were joining the veteran runner for their first time in Boston, one of racing’s most elite events.

She had finished the race in 3:45:17, a time that gave her another BQ — Boston qualifier — meaning she had qualified to run the 2014 race. In other words, it was a pretty big deal.

She and a friend were getting post-race snacks and had just started heading toward their family members and friends when they heard the first explosion.

They were about a block behind the finish when they heard the explosion. “It was incredibly loud and really shook everybody and everything. My friend Christa [Carone] looked at me in horror.”

What they didn’t know then is that the first of two bombs had exploded.

“All of a sudden it was like we were salmon swimming the wrong direction,” she says. “That’s when I realized that something bad really happened.”

When Megan Searfoss started running that Mother’s Day in 2007, she wasn’t setting out to start a race. But that’s exactly what happened. The runner and Ironman triathlete had moved to Ridgefield, Connecticut, with her husband and began running on Sundays as a way to make friends in the area. That first Mother’s Day, more than 40 women showed up. The next year, Run Like a Mother was officially born; the inaugural race drew more than 400 women.

“It just became such an incredible, incredible race. All of a sudden I realized what this day provided, running on Mother’s Day,” Searfoss says.

“I think that no matter what your experience level is, when you cross [the finish line], you have that same experience. My goal with RLAM is to create an environment where women can achieve something quickly.”

The 5K is now held in eight cities throughout the country, and there is even an option to participate in a virtual race. There is also a 1-mile race for kids.

Searfoss says that at this year’s races, set for May 12, there will be a moment of silence for Boston Marathon explosion victims, as well as for the victims of the school shooting in Newtown, Connecticut, which is just miles from Ridgeland.

We now know that the “something bad” was two explosions near the finish line killed three people and injured more than a hundred, leaving many with missing limbs. The suspects — two brothers — were eventually found after an intense manhunt. One suspect was killed and the other remains in police custody.

Thankfully, Searfoss and her friend found their families, but not after some tense moments of uncertainty. Two runners they knew were pulled off the course within a mile of finishing the race. And though Searfoss soon found her husband and daughter, her friend Christa was sure what had happened with her family until she opened her hotel room door and found them inside.

“I think that was the scariest part, not knowing where they were,” Searfoss says.

Running is often a solitary sport, but the running community is huge, bound by an intense loyalty to the sport. It’s a chance for many to clear their heads, a chance to throw on a pair of running shoes and head out the door, leaving behind, at least for a little while,  crying children, dirty dishes and stress. Searfoss says she hopes the bombings don’t deter people from the “free therapy” that running serves as for many.

“I think that for me, what I teach with RLAM is that running is a safe place. It’s a place of healing and growth. To let this random act of violence is to let it, him, whatever, win,” she says.  “Running provides such clarity to me, and I hope to share that with other people. It lets you see what’s right in the world, and not focus on what’s wrong.”

Her message to other runners? “Carry on and not let this situation make you afraid. Use it to become stronger.”

Searfoss said that her husband put things in perspective for her: “For the rest of your life you are going to be able to say that you were there, that you were part of this horrific event. And that’s sad for me.”

“I don’t want this to represent what Boston means to me, but it will always be part of the fabric,” she says.  “It’s just going to be a corner of the quilt.”

For more information about Run Like a Mother, visit RunLikeAMothertherace.com.

More on the Boston Marathon Bombings

17 hrs ago
by Alexandra Bruin