Runners and non-runners alike have come together to send out positive thoughts and prayers to Boston after an explosion Monday that has shaken the country. 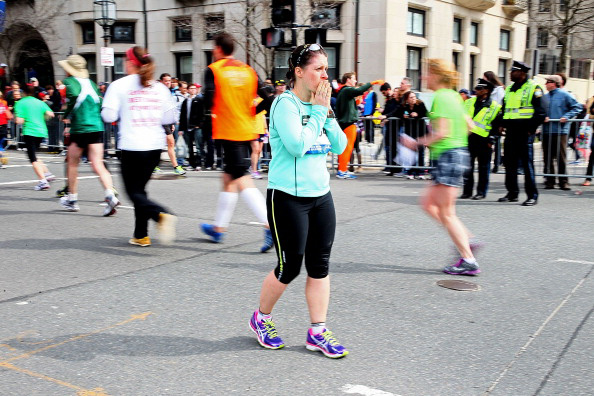 The New York Times reports that 2 were killed and dozens more injured after two explosions rocked the finish of the Boston Marathon.

The explosions, which went off seconds from each other, occurred three hours after the winners crossed the finish line, the New York Times reports. According to the Boston Police Department, another explosion went off later at the John F. Kennedy library. It was not clear if that explosion was related, but police were treating it as such.

The latest report from the Boston Police Department was at least 100 people were injured, according to a report by the Boston Globe. It was unclear whether those who were injured were runners or spectators.

Race officials reached out via Twitter soon after the explosions: “There were two bombs that exploded near the finish line in today’s Boston Marathon. We are working with law enforcement to understand what exactly has happened,” read a tweet from the race organizers’ official Twitter page.

The news spread on Twitter with tweets from some people in the area — including reporters — posting photos and graphic accounts of the scene.

Eboni Webber, a 32-year-old system administrator and avid runner from South Carolina, said she knew several runners who were participating in Monday’s race. She said she believed that they had all checked in via Facebook to let friends and family know they are OK.

“I have a lot of emotions going through me right now. My heart just aches for everyone right now,” said the former college sprinter, who now runs both marathons and half marathons. “It terrifies me to think this could happen at such a historic race. It does make me think about what may happen at other historic races like the Chicago Marathon or New York for that matter.”

“This is a horrific day in Boston. My thoughts and prayers are with those who have been injured. I have been in touch with the President, Mayor Menino and our public safety leaders. Our focus is on making sure that the area around Copley Square is safe and secured. I am asking everyone to stay away from Copley Square and let the first responders do their jobs.”

The 26-mile marker of this year’s Boston Marathon was to honor the victims of December’s shooting at Sandy Hook Elementary School in Newtown, Connecticut. A moment of silence was held for the victims prior to the race.

More on the Boston Marathon explosions

How to talk to your kids about tragedy